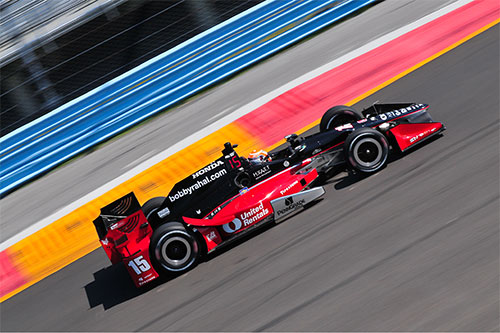 Since steering his burgeoning career stateside at the beginning of 2015, Jones has been a consistent front-runner in the fiercely-disputed Mazda Road to Indy series behind the wheel of his 450bhp Carlin Dallara IL-15 single-seater, with no fewer than five victories, 13 podium finishes, nine pole positions and three fastest laps to his credit to-date.

Despite finding himself out-of-luck in the most recent event at Mid-Ohio, the talented Dubai, UAE-based ace will nonetheless enter the final two weekends of his sophomore Indy Lights season – at Watkins Glen on 3 September, followed by a double-header at Laguna Seca a week later – firmly in contention for the coveted crown at just 16 points adrift of the overall lead.

The 2016 Indy Lights champion will be awarded a $1m scholarship towards the IndyCar Series and three guaranteed races in 2017 – the legendary Indianapolis 500 amongst them. Having similarly tested for Rahal Letterman Lanigan Racing at Sonoma Raceway 12 months ago, Jones reflected that his second taste of top flight machinery marked another step towards his ultimate goal.

“It was fantastic to climb back into the cockpit of an IndyCar, and I owe a huge thanks to Rahal Letterman Lanigan Racing for placing their confidence in me and affording me the opportunity,” acknowledged the 21-year-old Brit. “Watkins Glen is such an iconic circuit, and its fast-and-flowing nature really showcases the IndyCar’s incredible downforce. I settled straight back into the groove and felt comfortable pretty much immediately, which was really positive and it was great to work with the team again.

“We’ve made no secret of the fact that moving up to IndyCar is our principal objective for next season, so the more track time I can get between now and then, the more prepared I will be to take that step because I’m learning every time I go out. It’s notoriously difficult with the funding required and limited number of seats available, but we’ve spoken to a couple of teams with regard to 2017 and are exploring all potential options.

“Before that, obviously, we still have a title battle to fight and having been able to get a feel for Watkins Glen puts me in a solid position, as it will give me a bit of a headstart over drivers who haven’t been there before. It’s almost like a street circuit in some respects, with virtually no run-off anywhere – which by extension means there is no margin for error.

“When you lead the standings for so long like we did, everybody is constantly trying to knock you off your perch but now we’re the hunter instead of the hunted so it’s a different dynamic heading into the final three races. Instead of playing the percentage game as we have done lately, our mindset is to go out there and try to win them all – and if we can do that, we just have to let the maths take care of itself.”

“Ed did a fine job for us,” Nault reported. “He methodically got up-to-speed and never put a wheel off. The team hadn’t been to Watkins Glen with an IndyCar since we won there in 2008, and it has changed a lot since then – the track has recently been repaved and is now much faster. Ed found that the car was reasonably balanced to start with, but he was able to provide good feedback that allowed us to make it even quicker.

“The way the IndyCar rules are structured, we needed Ed to complete as many laps as possible. This left him to put in long stints and run the tyres longer than a fuel load but even under these conditions, he still produced good times on old rubber. This is a very demanding track and Ed was able to keep up with it physically. All told, we are very happy with the job he did for us and we thank him for his efforts."