Jones kicks off 2014 with strong test in Hungary 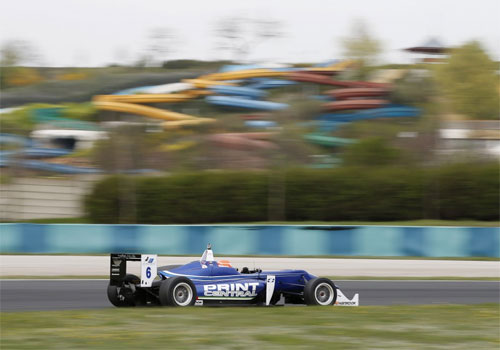 Ed Jones started his 2014 FIA Formula 3 European season with a competitive first official test at the Hungaroring on the outskirts of Budapest this week.  The Dubai based racer was consistently in and around the top ten throughout the two day test as he undertook his first official outing with the Carlin team. Ed completed his Hungarian test with the 10th fastest time on Saturday.

Ed has enjoyed a busy winter, competing in the Florida Winter Series during the traditional European ‘off-season’.  The UAE driver racked up eight podiums and one pole position during his Florida programme, developing his race craft ahead of the 2014 F3 season.

Moving into the prestigious FIA Formula 3 European Championship this year, Ed follows in the footsteps of several F1 stars who have passed through European F3, such as Sebastian Vettlel and Lewis Hamilton.  Ed’s Carlin team also have a strong history in F3, producing drivers such as Daniel Ricciardo and Kevin Magnussen.

Taking to the track for the first time in an official capacity with his new Carlin team, Ed wasted little time in getting up to speed.  During Friday’s first session he was eighth quickest in his Volkswagen powered Dallara and went on to complete a further 27 laps in the afternoon session to finish 11th fastest overall.

After spending time analysing data with his engineer, Ed was back on track on Saturday morning.  Once again the 19 year-old showed promising pace, 11th fastest over the course of the morning.  Ed improved further in the afternoon, finding some more time within himself and his car at the start of his rookie F3 season.  The eighth quickest time of the afternoon was enough to place him 10th fastest of the day overall.