Jones keeps eyes fixed on the prize despite Mid-Ohio disappointment 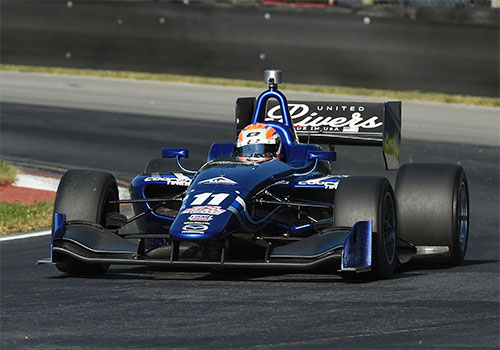 Ed Jones continued to narrow the gap to the top of the 2015 Indy Lights standings in the penultimate outing at Mid-Ohio Sports Car Course, despite cruel misfortune costing him a potential fourth victory of a sensational rookie campaign.

After getting to grips with the technical Mid-West circuit in opening practice, the 20-year-old Brit improved significantly in FP2 to annex second position on the timing screens behind the wheel of his Carlin single-seater, but set-up issues in qualifying restricted him to just tenth spot on the grid for race one – an immediate drawback around a track where overtaking is famously at a premium.

No sooner had the green flag dropped, however, than things began to look up as chief title rivals Jack Harvey and Spencer Pigot tangled, sending both scurrying for the pits. Gifted a golden opportunity, Jones wasted no time at all in taking full advantage, fighting his way up to sixth and going on to chase down Juan Piedrahita in fifth.

Unfortunately, there was contact as the Dubai, UAE-based ace made his move, which transpired to be the unforeseen catalyst for an inspired strategic call. With little to lose and the championship battle in-mind, Jones darted for the pits to bolt on a new set of tyres, with the intention of posting a quick lap time to earn a prime starting spot for the race two grid.

The tactical masterstroke paid off richly, as the British Racing Drivers’ Club (BRDC) Rising Star and former European F3 Open Champion – now down in ninth – made good use of his fresh rubber to record the second-fastest lap on the final tour and in so doing secure himself a front row berth for the next day’s contest.

Lining up alongside championship leader Harvey, the scene was set for an enthralling duel and for the first half of the race that was exactly what the two drivers delivered. Jones got the jump at the start and thereafter artfully staved off his countryman’s advances, withstanding intense pressure until the second of two comings-together between the pair sent the Williams-Harfield Sports Group protégé spinning.

Following a second unscheduled pit visit in as many races, Jones returned to the track and overhauled Harvey six laps from home to flash past the chequered flag in ninth place again – scant reward for all the pace he had displayed. Nonetheless, the Mazda Road to Indy rookie still closed to just 18 points adrift of the top of the table with only one double-header remaining at Laguna Seca in California on 12/13 September.

“It was a tough weekend for us when we deserved much more, but that's racing!” he reflected. “We made a lot of progress from the first practice session when we were a bit on the back foot, and after the incident midway through race one, we sacrificed a couple of positions to try and improve our qualifying time for race two which obviously worked out well.

“I got a really good start and led until Harvey made a couple of over-optimistic moves, the second of which took us both out. Nevertheless, we head into the last weekend of the season very much in the running and given that nobody expected us to be in contention to win the title in our first year, I have nothing really to lose. Mid-Ohio wasn’t the ideal weekend by any means, but I believe we have a great chance to take the championship at Laguna and that will be my sole focus.”