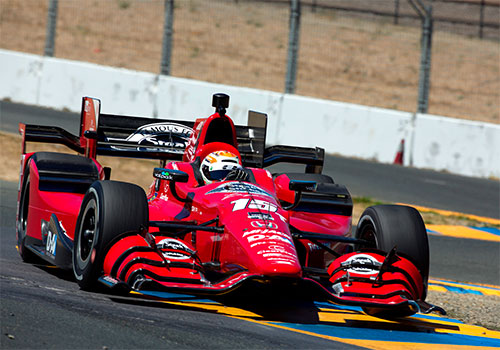 Ed Jones firmly staked his claim to a future at the pinnacle of the Mazda Road to Indy ladder with an eye-catching Verizon IndyCar Series test debut for front-running outfit Rahal Letterman Lanigan Racing at Sonoma Raceway.

The 20-year-old Brit has been a revelation this year – his maiden campaign stateside, following a promising formative career in Europe – and sped to a hat-trick of victories straight off the bat in the fiercely-disputed Indy Lights championship.

Belying his rookie status, Jones will enter the 2015 finale at Mazda Raceway Laguna Seca next month (12/13 September) as one of the leading three contenders in the chase for the coveted crown, just 18 points adrift of the top of the title table in his Carlin single-seater.

Beyond that, the Dubai, UAE-based ace’s goal is to take the next step up to the headlining IndyCar Series, and he was handed a golden opportunity to prove his mettle as part of a shared test day around the 2.38-mile, 12-turn Sonoma road course – intended to help IndyCar teams prepare for their own eagerly-anticipated season showdown in California at the end of August.

Rahal Letterman Lanigan Racing driver Graham Rahal currently sits second in that particular contest – a scant nine points shy of the championship lead – meaning Jones had a serious job to do behind the wheel of the Indiana-based outfit’s 600bhp Honda-powered Dallara.

Not only did he have to swiftly learn the car – a bigger, heavier and more powerful proposition than he has been used to – but he also needed to get to grips with the challenging Sonoma layout, which was uncharted territory for him. It was a task that the Williams-Harfield Sports Group protégé handled admirably, maturely and in his stride.

“It was an amazing experience to drive an IndyCar for the first time,” enthused Jones. “I have to thank Rahal Letterman Lanigan Racing again for the opportunity – it was a pleasure to work with such a professional team that made me feel right at home from the beginning.

“The sheer level of downforce took me a little by surprise – that was the main difference from the Indy Lights car, I would say. The carbon brakes also mean you can brake a lot deeper and need to alter your technique slightly, but in terms of the power it wasn’t as big a jump as I had been expecting.

“Overall, it was a fantastic test and I feel I performed well. I took the necessary and logical steps on each run to improve whilst giving the team technical feedback to tune the car towards the circuit. The Verizon IndyCar Series is definitely where I want to be, and I am sure I have the capability to be successful in it from the get-go. I look forward to seeing what the future brings.”

“Ed is a true professional,” Nault underlined. “He impressed us with his ability both on-track and during the debriefing process at Sonoma. Despite it being his first time at the circuit, he got up-to-speed quickly.

“We made some changes to the car and his feedback was excellent, which helped us to develop the set-up for Graham. Ed was only allotted one set of sticker tyres that he used at the hottest part of the day. If time and tyres were available, we’re sure he could have gone even faster.”