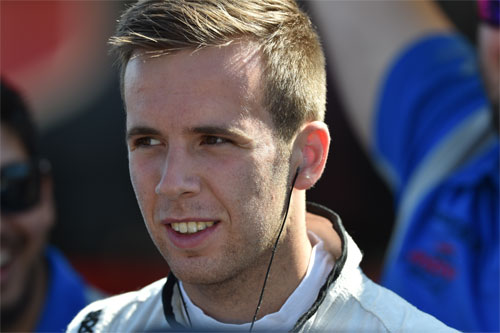 A single-seater specialist, Jones was an Indy Lights title protagonist with Carlin in 2015 – his maiden campaign stateside. The 20-year-old Dubai-based Brit will resume battle in the fiercely-disputed US open-wheel series this year and has the coveted crown very much in his sights, but in the meantime, he will return to the wheel in an altogether different kind of event – the opening round of the 2016 FIA International 24H Series.

The 11th-hour agreement will see Jones team up with Hannes Waimer, Wolfgang Triller, Charlie Frijns and Christopher Zöchling in Lechner’s #81 Porsche 991 GT3 Cup entry, as the quintet take on 17 rivals in the 991 category – not to mention the other 82 cars that will be simultaneously sharing the circuit...

Jones might be more accustomed to shorter sprint races, but he is far from intimidated by the challenge ahead. In fact, as he explains, he cannot wait to get out on-track.

“It’s exciting to be making my endurance racing debut this weekend with Lechner Racing Middle East,” enthused the British Racing Drivers’ Club (BRDC) Rising Star and ex-European F3 Open Champion. “It was a last-minute deal, but it will be amazing to compete on home turf and I have a strong team behind me and four excellent team-mates. I’ve never driven a sportscar before let alone entered a 24-hour race, so their knowledge will be vital as I endeavour to get to grips with everything as swiftly as possible.

“I’m obviously fully committed to pursuing the single-seater career path and my forthcoming Indy Lights title bid, but having a race as prestigious as the 24H Dubai on my CV can certainly do me no harm and I really can’t thank Lechner enough for this fantastic opportunity. With my team-mates’ experience, I hope to be up-to-speed quickly and notwithstanding the quality of the opposition in the 991 class, I believe we have a great chance to achieve a solid result.”