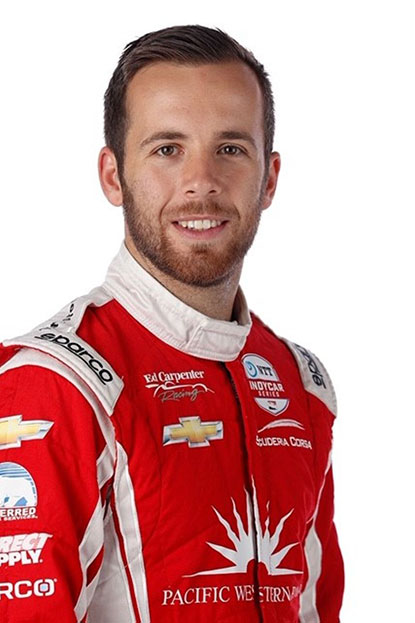 Ed returned to the Goodwood circuit to race on the 2.4mile course in the RAC TT feature race in a 1964 AC Cobra.

COVID inspired esports racing dominated much of the second quarter of 2020 and brought a new dimension to motor racing.

Races against former team mates and adversaries resulted in some good results and an opportunity to renew contacts.

DTM championship with WRT was not destined to happen.

Jones raced the street and road courses in the ECR car number 20 in 2019 with Scuderia Corsa.  Jones set the fastest no-tow speed in May, fastest overall in one of the final practice days and in qualifying for the INDY500  he produced the fastest top speed at 241mph.

Jones’ impressive speed, consistency and all round performance over the course of his rookie season lead him to a one year contract with Chip Ganassi Racing, who recruited him to drive the No.10 NTT Data car alongside four-time champion Scott Dixon.   Jones secured two podium finishes and displayed some excellent maneuvers.

Having clinched the Indy Lights crown in 2016, Jones stepped up to the pinnacle of US open-wheel competition for 2017 – the Verizon IndyCar Series.  Piloting the No.19 Boy Scouts of America car for Dale Coyne Racing alongside multiple Champ Car title-winner Sébastien Bourdais, Ed turned heads from the outset, tallying back-to-back top ten finishes in his first two starts and speeding to an outstanding third place in the 101st running of the iconic Indianapolis 500.

His results earned Ed the coveted IndyCar Rookie of the Year accolade.

Jones’ impressive speed, consistency and all-round performance over the course of his rookie season in the Verizon IndyCar Series brought him to the attention of American single-seater powerhouse Chip Ganassi Racing, who recruited him to drive the No.10 NTT Data car alongside four-time champion Scott Dixon in 2018.

In 2015, Jones shifted his burgeoning career stateside as he joined Indy Lights, the recognised feeder championship to the Verizon IndyCar Series. Remaining with Carlin, Ed claimed pole position and victory in both his and the team's first Indy Lights start in St. Petersburg, Florida. He proved that his stellar form was no flash in the pan by similarly winning the second and third races of the campaign, going on to finish an excellent third in the final classification.

Jones returned to Indy Lights with Carlin the following year. Despite finding himself up against an even tougher field, he built on his previous success and two victories, eight pole positions and eight podium finishes later, he was duly crowned champion.

Ed was subsequently awarded the prestigious British Racing Drivers’ Club’s Earl Howe Trophy, for producing the best performance by a British driver in North America in 2016.

After dipping his toe into the water in the finale of the 2012 European F3 Open Championship with Team West-Tec – catching the eye by reaching the rostrum on his debut – Jones graduated to the series full-time the following season, racing for the same team. Despite missing the curtain-raiser, he secured the fiercely-disputed title courtesy of six wins and four further podium finishes, four pole positions and three fastest laps – in so doing making history as the series’ youngest-ever champion.

In a busy year for the teenager, Ed also entered the British Formula 3 Championship with West-Tec – placing third in the National Class points table – as well as continuing to compete in the Formula Renault Eurocup with Fortec, claiming a brace of podiums at Austria’s Red Bull Ring en route to 11th spot in the standings.

He additionally contested selected rounds of the Formula Renault Northern European Cup and the end-of-season Macau Formula 3 GP, while making a one-off appearance for Fortec in the FIA Formula 3 European Championship at Hockenheim in Germany.

Jones switched to Carlin Motorsport for a concerted attack on the same series in 2014, making a promising start with five top ten finishes from the opening three outings – including two podiums – before a back injury sustained at Pau ruled him out of action for several months. He returned towards the end of the campaign and tallied five further top ten results.

Jones continued his collaboration with Fortec into 2012, competing in the Formula Renault Northern European Cup – achieving five top ten results – and Formula Renault Eurocup, in which he finished inside the points at France’s Paul Ricard Formula 1 circuit.

Born in Dubai in 1995, Ed first climbed behind the wheel of a go-kart at Jebel Ali – the UAE’s longest-established karting track – at the age of just four.

He began his racing career in local karting competitions five years later, clinching the United Arab Emirates Cadet Class crown at his first attempt. He collected six titles at various levels before making his European debut in 2008, contesting the Rotax Max and KF3 categories until 2010.