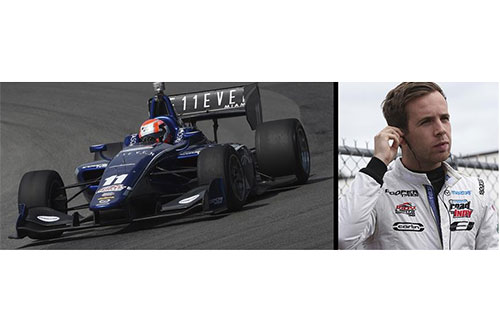 Ed Jones is one of six drivers in contention for the Indy Lights Presented by Cooper Tires championship crown in a hotly contested season with only two events remaining.

PALMETTO, Fla. – After leading the points chase since April, a couple of disappointing weekends recently has seen Dubai-born Englishman Ed Jones fall to second place in the Indy Lights Presented by Cooper Tires title chase. Just three races remain – including two at Mazda Raceway Laguna Seca, where 2015 Carlin teammate Max Chilton earned both pole positions one year ago – so Jones knows that time is running short to make his move to regain the top spot.

On the line is a Mazda scholarship that will place the Indy Lights champion in three Verizon IndyCar Series races in 2017, including the 101st running of the Indianapolis 500.

Jones, 21, began racing karts in his native Dubai and became the youngest European F3 Open champion in 2013, earning six victories and 10 podium finishes. He moved up to the FIA Formula 3 European Championship in 2014 and, with his Carlin team, made the jump to America and the Indy Lights series last season. Jones won the first three races, took the early lead in the championship and went on to finish third behind Spencer Pigot and Jack Harvey.

After a spate of bad luck in this season’s opening rounds at St. Petersburg, Fla. left him 10th in the early title chase, Jones rebounded with four straight podium finishes, including victories at Barber Motorsports Park and the Indianapolis Grand Prix, to take the championship lead. Despite the heartbreak of losing the Freedom 100 by a record-setting 0.0024-seconds, Jones left Indy with a comfortable 29-point lead. But a surging Dean Stoneman and Santi Urrutia steadily cut into Jones’ advantage. With Urrutia’s sweep at Mid-Ohio, Jones heads for Watkins Glen 16 points behind.

“The championship is the goal,” said Jones, “but I have to go very strong in the last three races. If I can be the best in those races, that’s all I can control. I know I’m quick at Mazda Raceway. We’ve got good data from last year and my engineer, Geoff Fickling, knows this track so well. Geoff and I get on very well and we both know what we need from each other to produce the right car.”

Trevor Carlin’s eponymous squad teamed Jones and Chilton last season and, with Chilton’s move to IndyCar, brought American Neil Alberico and Puerto Rican Felix Serralles onboard in 2016. Jones appreciates the continuity involved in remaining with the same team and the close-knit atmosphere the open-wheel powerhouse brings to the table. On any given race weekend, you can find the Carlin team taking up a good portion of a local restaurant as the team dines en masse.

“That’s really the English way of doing things. It was the same way when I was in Europe. You spend a lot of time with the team during the race weekends, including going to dinner together. It’s good to really know the people working alongside; that way, they’re doing the best they can for you and they know you’re trying your hardest. When you have that trust, it makes a big difference. The way the team is run is so important. You see that in how competitive Carlin is in every series in which they compete.”

Jones knows that the Mazda scholarship brings with it a chance to graduate to IndyCar, which is the goal of every driver on the Mazda Road to Indy Presented by Cooper Tires. With two IndyCar tests under his belt, he certainly has a good idea of what to expect, having tested in the “big car” with Rahal Letterman Lanigan Racing at Sonoma last year and Watkins Glen last week.

“The great thing about the Indy Lights car is that you can take the seat out and put it right into an Indy car,” Jones continued. “But the cars feel very different even just to sit in, and obviously very different to drive. An Indy car reminds me of a Formula 3 car, with all the downforce. You really have to be smooth and carry a great deal of speed through the corners in order to be fast. The Indy Lights car has more power than downforce so you can get away with sliding the car quite a bit more. So the Indy car requires a different driving style.

“The Rahal team was great to work with; they’re very professional. The Carlin team operates at a very high level so it made the transition quite seamless. I love going to new tracks and experiencing new things, so the entire day at Watkins Glen was great – and I’ll be able to give feedback about the track to the Carlin team.”

Based in Miami, Jones does not get many opportunities to race in Europe anymore. But on a recent weekend, Jones Tweeted several photos of his test of a few historic cars owned by a friend. It brought back memories of his experiences at another legendary event, one that resides on the bucket list of every racing fan: the Goodwood Revival in England.

“I really enjoy driving historic cars. A few weeks ago I drove a Lotus and a Cobra. It’s very different from what I’m used to – and the sound is amazing. I raced at Goodwood two years ago but now it clashes with the Mazda Raceway date. It’s one of my favorite events; it’s such an amazing experience. People put so much effort into each of the cars that fit into their specific time period. It’s a huge crowd and everyone is so interested in the cars – and those kinds of events are so relaxed. It’s good to see all the people I worked with in racing, people I don’t see so much anymore. I really enjoy Goodwood and I hope I can get back there soon.”

But for now, Jones’ focus lies entirely on the Indy Lights championship and the scholarship that will lead him to the ultimate prize.

“Winning the championship has always been the goal. The scholarship gives the winner the opportunity to move up to IndyCar, to prove what you can do. I really want to be in the Indy 500 next year and I know that if I get the right opportunities, I can do a good job. The car really suits me and I know I could be successful.”