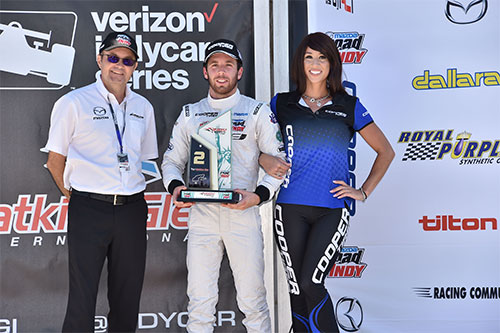 Ed Jones has set the scene for a nail-biting conclusion to the 2016 Indy Lights campaign, after closing to just one point shy of the championship lead with a gritty effort to secure the runner-up spoils at Watkins Glen International last weekend.

Jones had got his first taste of the legendary Upstate New York road course – home to the United States Grand Prix between 1961 and 1980 – during a successful second IndyCar test with Rahal Letterman Lanigan Racing the previous month, and he returned fully focussed on regaining the momentum that had slightly missed a beat at Toronto and Mid-Ohio in July.

The talented Dubai, UAE-based ace duly came out-of-the-blocks in fine form by pacing the opening practice session, before sagely electing to conserve his tyres in view of qualifying. Swiftly picking up from where he had left off, Jones looked to be well on-track to clinch his eighth pole position of the year behind the wheel of his 450bhp Carlin Dallara IL-15 single-seater until he was baulked on consecutive laps, consigning him to a frustrated third on the starting grid for the race.

When the lights went out, the 21-year-old Brit reacted instantly to move up to second and pull level with the leader on the approach to Turn One, but being on the outside line, he was obliged to concede as a couple of aggressive adversaries demoted him to fourth. Undeterred, Jones wasted little time in recovering third spot from André Negrão, allowing him to home in on chief title rival Santiago Urrutia in second.

For several laps, the former European F3 Open Champion found himself embroiled in a four-way scrap before finally overhauling the Uruguayan, who subsequently slipped down the order after flat-spotting a tyre that ultimately led to a puncture. Immediately putting the hammer down, by the chequered flag, Jones had practically halved the seven-second deficit separating him from race-winner Zach Veach.

Not only that, but the seventh podium finish of his sophomore season in the fiercely-disputed Mazda Road to Indy series enabled him to reduce Urrutia’s advantage in the chase for the coveted crown to just a single point. That means the title tussle will go right down to the wire in the Laguna Seca double-header finale in California this weekend (10/11 September) – and the Williams-Harfield Sports Group protégé is palpably up for the fight.

“I love Watkins Glen – it’s a real old-school circuit and so much fun to drive with its high-speed corners and fast, flowing nature,” Jones enthused. “Having tested there in the IndyCar, I obviously knew which way it went, but after the first few laps that didn’t really make a difference anymore as the calibre is so high in Indy Lights that everybody gets up-to-speed very quickly.

“We were on the pace from the outset which left us feeling confident, but our tyres blistered unexpectedly early in the first practice session so we chose not to use a fresh set in FP2 in favour of saving them for qualifying and the race. We topped the timesheets for the majority of qualifying and I was on course for a time that would easily have been good enough for pole when I got held up by Urrutia, after which my tyres had passed their peak and we had to settle for third.

“I got a good start in the race and went wheel-to-wheel with the leader into Turn One, but with him protecting the inside line, I had to take my chances on the outside. A couple of other drivers dived down the inside, which forced me to take avoiding action so as not to get collected and that dropped me to fourth. I reclaimed third pretty quickly and then set my sights on Urrutia. I knew I needed to finish ahead of him to claw back some points in the championship, but every time I went for a move he covered it by using one of his push-to-passes.

“Eventually, I got a good run down the straight and pulled out of his slipstream to overtake around the outside into the Inner Loop, but by then, Veach had been able to establish too much of a lead. That was a shame, as the Carlin boys had given me a great car and we definitely had the pace to take the fight to Zach. I was consistently closing the gap, but we just ran out of laps.

“Still, in a race that was quite different to what we’ve been used to in terms of tyre degradation, second place was a very solid result – especially with my two main rivals both hitting trouble – and we’ll go to Laguna Seca with everything to play for. We had a good car there last year and it’s another circuit I enjoy, so I’m feeling optimistic and will be able to draw upon my experience from last year’s title-decider. I’m not going to underestimate anybody, but by the same token, I know I’m a much stronger and more complete driver than I was 12 months ago – so bring it on!”