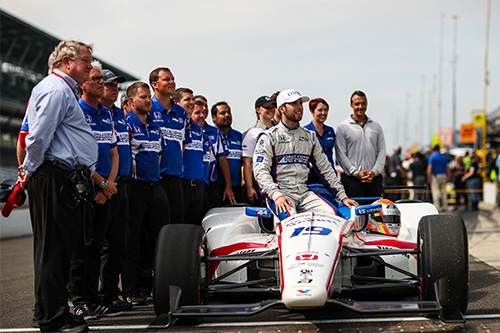 Ed Jones will line up an impressive 11th on the grid for his first Indianapolis 500 this weekend (28 May), after averaging an eye-watering 230.578mph around the legendary ‘Brickyard’ oval during qualifying for ‘The Greatest Spectacle in Racing’.

As the reigning Indy Lights Champion, Jones has made a strong start to his maiden Verizon IndyCar Series campaign this year with Dale Coyne Racing, tallying a brace of top ten finishes from the first five outings behind the wheel of his 720bhp Dallara-Honda single-seater to sit 13th in the standings arriving at Indianapolis.

After successfully completing the mandatory rookie orientation programme, the talented Dubai, UAE-born ace went on to lap the 2.5-mile superspeedway more than 200 times over the course of five days of practice. In evidence of his swift progress, he surpassed the 230mph mark on ‘Fast Friday’ to place an excellent ninth in the classification – ahead of some very big names indeed.

Saturday qualifying was delayed for five hours by heavy rain, but when the action eventually got underway, Jones belied his comparative lack of experience and unfavourable early slot in the running order to lap tenth-quickest, missing out on the ‘Fast Nine’ shoot-out by the slender margin of just 0.141s as he featured up towards the sharp end throughout.

The following day, the 22-year-old Brit was accordingly the final driver to take to the track in Group 1 qualifying to determine the grid positions from tenth down to 33rd, with all previous lap times erased. With only a single four-lap attempt permitted, the pressure was on but Jones rose to the challenge admirably, circulating consistently above 230mph in what was the fastest Indianapolis 500 qualifying session for more than two decades and the third-fastest in history.

The Williams-Harfield Sports Group protégé will duly start the world’s largest single-day sporting event from the middle of the fourth row – the second quickest-rookie behind two-time Formula 1 World Champion Fernando Alonso and ahead of three of the seven former winners in the fray in what has been billed as the toughest field in living memory.

Amongst the big-hitters that Jones outpaced were Team Penske powerhouse trio Juan-Pablo Montoya, Hélio Castroneves and current IndyCar championship leader Simon Pagenaud. He similarly outqualified no fewer than six other race-winners in the fiercely-disputed open-wheel series.

In the wake of team-mate Sébastien Bourdais’ high-speed accident that has left the Frenchman with multiple fractures to his pelvis and hip, it was a timely tonic for the DCR crew, and erstwhile European F3 Open Champion Jones is now fired-up to prove his potential once again in the 101st edition of the iconic Indianapolis 500 – in front of an anticipated crowd of more than 250,000.

“Indianapolis Motor Speedway is the most famous racetrack in the world and the Indy 500 is the most famous race in the world, and it’s amazing to be here,” he enthused. “I raced here last year in Indy Lights, so I came in with a bit of prior experience around the track but it’s obviously a lot more extreme when you’re going faster and it’s a place you’ve got to treat with so much respect, because you can end up paying a big price for a small mistake.

“I spent the practice week getting comfortable and working on running closely in traffic. The first two days were very solid and I learned a tremendous amount, and whilst the hot and windy conditions later on perhaps hampered preparations a bit, we went into the weekend knowing we had good pace.

“Oval qualifying is always nerve-wracking – particularly my first one for the Indy 500 – so having a five-hour rain delay made it a million times worse! You’re going out there on a different day in different conditions, meaning you don’t know what to expect and have to just keep it flat and hope for the best. The car was right on the knife-edge, and it was a real thrill – I enjoyed every moment.

“I really wanted to be in the Fast Nine, but maybe we didn’t get the set-up quite right and that left us with it all to do again on Sunday. In the morning practice session, we rolled out, did four laps and said, ‘let’s park it’ because we had the perfect car, but then in the afternoon it was quite loose. I had to make several corrections, but nonetheless it was a good run and a great job by the guys and I think I got everything out of it that I could.

“It was a tough day on Saturday with Seb’s massive crash and all my thoughts are with him for a speedy recovery, but our team spirit is so strong and I’m proud to be representing DCR in the Indianapolis 500. Thanks to Dale and all the engineers. Hopefully we can take it further forward in the race.”