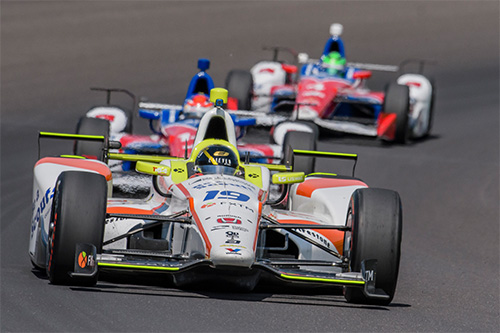 Ed Jones vied for victory during the course of a scene-stealing performance on his Indianapolis 500 debut last Sunday (28 May), as the talented Dubai, UAE-born ace took the fight to some of the sport’s greatest drivers en route to his maiden Verizon IndyCar Series top three finish.

Jones lined up 11th amongst the 33 high-calibre protagonists for his first crack at one of motorsport’s most legendary and fiercely-disputed races in its 101st year – an event so steeped in history, tradition and folklore that it has earned the sobriquet ‘The Greatest Spectacle in Racing’.

Unexpectedly thrust into the role of de facto team leader at Dale Coyne Racing in the wake of team-mate Sébastien Bourdais’ pelvis and hip injuries, the reigning Indy Lights Champion wound up a confidence-boosting second-quickest at the conclusion of the eight practice sessions. Completing no fewer than 334 laps of the 2.5-mile oval behind the wheel of his 720bhp Dallara-Honda single-seater, he reached a dizzying top speed of 233.008mph in the process.

An electric atmosphere enveloped the iconic Indianapolis Motor Speedway on race day, but following a promising start to gain some early ground, Jones picked up rear wing damage from the dramatic accident just ahead of him that removed pole-sitter Scott Dixon and Jay Howard from contention on lap 53.

Forced into making an unscheduled extra pit-stop for repairs when the action resumed after a red flag, the delay dropped the 22-year-old Brit to the tail of the field down in 28th place, but he dug deep and a fast and determined effort saw the #19 car climb consistently up the order and settle solidly back into the leading pack.

A well-timed pit-stop just before a full-course caution period in the closing stages of the 200-lap contest promoted Jones right to the sharp end, and he belied his comparative lack of experience and rookie status by duelling wheel-to-wheel with seasoned adversaries Hélio Castroneves and Takuma Sato. Indeed, the former – a three-time winner at the Brickyard – was effusive in his praise for his young rival once the chequered flag had fallen as he hailed a ‘very good’ and ‘very smart’ drive.

The erstwhile European F3 Open Champion was not done yet, however, as he got the better of countryman Max Chilton in the battle for third with five laps left to run. Remaining there to the end, he secured his finest IndyCar finish to-date and DCR’s best result at Indy – a welcome tonic for the team in Bourdais’ absence and a thoroughly well-deserved reward for Jones following a rough recent run.

His standout performance also vaulted the Williams-Harfield Sports Group protégé back up to ninth in the drivers’ classification – just five points shy of the top five – ahead of the next outing on the 2017 IndyCar calendar, the Detroit Grand Prix double-header at Belle Isle Park this coming weekend (3/4 June).

“It was a great race for us,” Jones enthused. “It was also the longest race I’ve ever been in, with so many ups-and-downs. We had a solid start, but when Dixon had his crash, I ran over some debris and it damaged the floor and rear wing. We had to change the wing, which sent me to the back of the field and then we had to claw our way up again. It’s so easy to put a foot wrong, and there were a few times when I genuinely thought I was heading for the wall but thanks to the Dale Coyne Racing team for putting a great car underneath me all month.

“We were really strong in traffic and kept pushing on and making up positions. We got some luck back with the last yellow as we pitted right before it, but then I put a big hole in my front wing, which created a lot of drag. That meant I was really good in the corners catching other cars, but as soon as we got to the straight sections I couldn’t tow up to them – we just lacked that top speed for the last 40 laps and it was very hard for me to defend or attack.

“Over the final 20 laps or so, the racing got much more intense, with people taking a lot more risks. It was pretty crazy out there, but I really enjoyed it. It was just frustrating that we couldn’t get the win because we were really close to it and without the damage, we had the car to do so. When you have an opportunity like that, you want to grab it but congratulations to Taku and Hélio. We did everything we could, and to come away with third place as a rookie is an amazing result.”

“We’re excited by the job Ed’s been doing this year,” added team owner Coyne. “He really performed well at Indianapolis. He gave us our best qualifying in 11th and our best finish in third, and I think having all the yellows and the red flag was good for him because it’s the longest race he’s ever been in and that allows you time for your heart rate to come down and to think about what’s going on. The season is only a third over and whilst it kind of feels like it’s culminated here, there is plenty more still to come.”