Weekend of two halves for Jones in Detroit 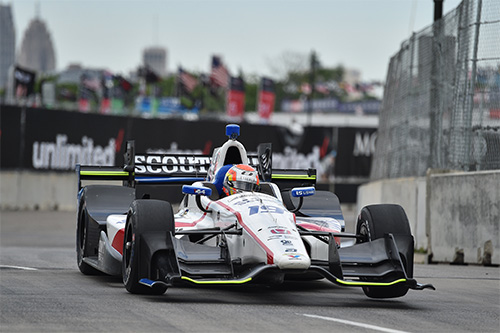 Ed Jones experienced both the highs and lows of Verizon IndyCar Series competition last weekend (3/4 June), as the talented young Dubai, UAE-born ace charged through the field to tally his fourth top ten finish from eight starts in the opening half of the ‘Dual in Detroit’, only to then register the first DNF of his rookie campaign the following day.

The lone double-header on the 2017 IndyCar schedule, the Detroit Grand Prix is held around the 2.35-mile, 14-turn Raceway at Belle Isle Park – a bumpy temporary street course widely regarded as one of the most physical and demanding venues on the calendar.

To add to the challenge, 16 of his 21 high-calibre rivals had previously led laps at the track – six of them, indeed, had reached the top step of the podium there – while Jones had never previously set eyes upon the Michigan-based circuit.

That disadvantage initially showed as the reigning Indy Lights Champion struggled throughout practice, languishing towards the wrong end of the order behind the wheel of his 720bhp Dallara-Honda single-seater at the pinnacle of US open-wheel competition.

The same theme continued in qualifying on Saturday as he could manage no better than 21st on the grid, but in front of an estimated 100,000 audience in the race, Jones dug deep and exploited an excellent strategy from Dale Coyne Racing to make up an eye-catching 12 positions, with only one car failing to reach the chequered flag.

The key to his progression was pitting just twice when the majority of the field opted to make three stops, and by dint of artfully staving off some late-race pressure, the 22-year-old Brit crossed the finish line ninth, well ahead of new team-mate Esteban Gutiérrez – a man with three seasons in Formula 1 on his impressive CV.

From 17th on the grid in race two the next day – following a significantly truncated qualifying session – Jones again went on the attack, climbing as high as eighth before his second pit-stop as he indulged in battles with defending IndyCar title-holder Simon Pagenaud and multiple Indianapolis 500 winner Hélio Castroneves.

Unfortunately, contact with JR Hildebrand at the midway stage prompted an unscheduled extra pit visit for a new front wing, dropping the former European F3 Open Champion to the very back of the pack, a lap down. Things then went from bad to worse with just over ten laps to go when he overshot Turn Seven and stalled his engine in the run-off-area. With the Holmatro Safety Team unable to get the #19 entry going again, Jones’ difficult day came to a premature conclusion.

With little time to rest, the Williams-Harfield Sports Group protégé will return to the track this coming weekend (9/10 June) under the spotlights of Texas Motor Speedway, fully intent on moving up from his current 11th spot in the drivers’ classification, a single point shy of the top ten.

“Having performed well at the first couple of street courses this year, we travelled to Detroit aiming to continue that trend and score some important points,” he mused. “That said, I was fully anticipating a tough weekend physically, especially considering I hadn’t had a lot of time to train over the last few weeks.

“Friday was a really tough day. Belle Isle was the first circuit this year where I didn’t have any prior experience, and learning it was more difficult than those I’ve been on in the past. You really have to attack it with confidence and if I’m being honest, after a few weeks of oval driving, I didn’t do a good enough job to prepare to get back to a street course and didn’t drive particularly well, which was reflected in Saturday’s qualifying result.

“I made big steps each time I took to the track, though, and as I gained more experience and felt more comfortable, I was able to attack more. We picked the right strategy in Saturday’s race and the car was really strong, allowing me to do some overtaking and maintain consistent lap times throughout the stints, so that was a confidence-inspiring result.

“Sunday, unfortunately, was less so. We tried a different strategy but it didn’t quite work out, and then obviously the contact sent us to the back, which is what really ruined our race. It was frustrating to pick up our first non-finish of the season, but those will happen in my rookie campaign at some point and we’re already working hard to get ready for Texas.”