Jones scythes through field in Texas before misfortune strikes 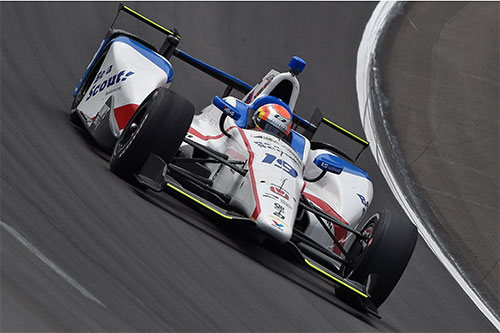 Fresh off the back of an excellent top three finish in the iconic Indianapolis 500, Ed Jones proved his oval racing prowess once again at Texas Motor Speedway last weekend, until a rival’s mistake removed him spectacularly from contention as he was running competitively inside the lead pack.

The reigning Indy Lights Champion was one of only two drivers in the fiercely-contested Verizon IndyCar Series never to have driven the 1.5-mile superspeedway prior to the weekend, and with just one 75-minute practice session to get to grips with the notoriously tricky circuit before qualifying, Jones knew he would need to learn fast.

After putting 51 laps under his belt, the talented Dubai, UAE-born ace was the second of the 22-strong field to qualify, with Dale Coyne Racing adopting a conservative approach by running a high downforce level. A two-lap average speed of 217.315mph – dipping underneath the existing lap record in the process – secured Jones 19th on the starting grid as he provided the team with valuable feedback.

The IndyCar rookie subsequently leapt up the order in the final practice session – placing an impressive seventh on the timesheets – leaving him in confident mood going into the 248-lap race under the Texan floodlights, the halfway point of the 2017 campaign.

Belying his lack of experience to climb into the top ten early on – featuring as high as sixth at one stage behind the wheel of his 720bhp Dallara-Honda single-seater – Jones was firmly in the fight for the podium positions when disaster struck shortly after a full-course yellow.

Four laps on from the re-start, a coming-together between Tony Kanaan and James Hinchcliffe just ahead sent pursuing cars scattering in all directions. As he tried to avoid the incident, the 22-year-old Brit backed off slightly but found himself collected from behind, putting him out on the spot – quite simply a case of wrong place, wrong time.

Whilst thankfully uninjured, Jones was understandably disappointed at having been denied the opportunity to vie for another top three finish at the pinnacle of US open-wheel competition when he clearly had the pace to challenge. The former European F3 Open Champion, however, has already turned his attentions towards the next outing on the calendar – the Kohler Grand Prix at Road America on 25 June.

“Although I’d watched a lot of the previous races, it was my first time actually competing at Texas Motor Speedway,” he explained. “I was excited to be returning to an oval after our performance at Indy, even if I was well aware that it wouldn’t be an easy weekend and that it would take a little bit of time to get used to initially. What’s more, as the only team that hadn’t been able to test there in April, we went into it with a lot of unknowns – and with some extra work to do to catch up to the others.

“I immediately loved the circuit and if anything, it was the most comfortable I’d ever felt on an oval from the get-go. I focussed my efforts on building up confidence quickly and adapting to the required driving style, but the limited track time counted against us and in qualifying we ran with too much downforce.

“Things were a lot better in the race, and we were picking off cars and looking strong when the guys ahead tried to run three-wide just before two-thirds distance. I think Tony [Kanaan] didn’t leave them enough room, which caused them to crash. I backed off and hit the brakes, but then I got collected from behind and there was nothing I could do – it sent me into the wall and game over.

“That was super frustrating because we had an extremely fast car, had come from 19th and I think we had a chance to win – that’s what hurts most. I feel bad for Dale [Coyne – Team Owner]. He’s put so much work into this team and we’ve been so quick this year, but there have been a lot of incidents – even if this was the first major one on my side of the garage. Still, we keep coming back – and we’re coming back stronger every time.”