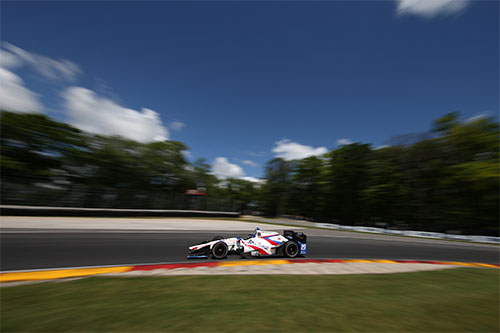 Although he had not previously competed around the picturesque four-mile, 14-turn Elkhart Lake road course in IndyCar – unlike 18 of his 21 high-calibre rivals – Jones did race there last year en route to lifting the laurels in Indy Lights, with pole position underscoring his pace and potential. The 22-year-old Brit had also tested there the previous week, and he duly came out-of-the-blocks in fine form in practice, placing seventh in the combined classification as he inched progressively nearer to the outright benchmark.

Despite struggling with tyre-warming issues in qualifying, Jones nonetheless advanced to the ‘Fast 12’ for the second time this season behind the wheel of his 720bhp Dale Coyne Racing Honda single-seater, equalling his best starting position to-date in 11th.

In windy conditions the following day, the former European F3 Open Champion began the 55-lap KOHLER Grand Prix well as he settled solidly into the top ten. He would maintain that positive momentum throughout – spending much of the race running in close company with 2012 IndyCar Champion Ryan Hunter-Reay – and after taking the final safety car re-start in ninth, he gained two more places before the chequered flag to cross the finish line seventh.

The result returned Jones to the top ten in the points table at the pinnacle of US open-wheel competition. Buoyed by his strong performance in Wisconsin, he will travel next to Iowa Speedway for a test ahead of the 11th outing on the 2017 IndyCar schedule – the Iowa Corn 300 – on 9 July.

“Road America is one of my favourite tracks in the United States,” reflected the Williams-Harfield Sports Group protégé, who wore a specially customised helmet for the weekend in tribute to late Chicago Bears NFL star and Dale Coyne Racing co-founder Walter ‘Sweetness’ Payton.

“It was good to go back to a road course, and we felt well-prepared after the positive test day there. The team was also competitive at Road America last season, so we had a decent starting point and we were confident we had a good package underneath us and that the circuit should suit us.

“Practice went pretty well and we showed encouraging speed all day. The track changed quite a bit in the afternoon session, but we were still fast. The field was really close so we knew qualifying would be tough, but by the same token, there were several areas in which we could improve so I was optimistic of being able to push for the top five.

“Unfortunately, the cooler temperatures on Saturday affected a few things, and I struggled to bring the tyres in, which meant it took too long to get up to pace. It was still good to make it into the second round of qualifying, but it left us with some work to do ahead of the race.

“The car was loose but fast for qualifying, and it was really loose again on Sunday – I was hanging on throughout the race! Most people went for a similar strategy, but the DCR boys did a great job and some good pit-stops helped us to progress through the field. Everyone was aggressive and it was hard racing, but we came out with a seventh-place finish and moved up a little bit in the points, so we’ll definitely take that.”