Jones thwarted by oversteer on tough day in Iowa 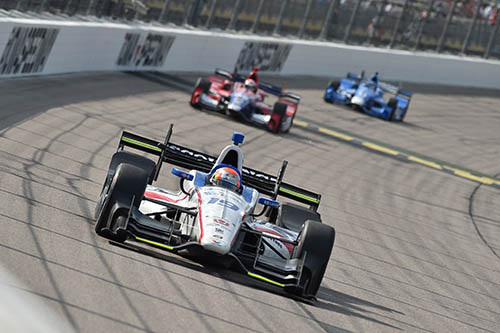 Ed Jones grappled with an ill-handling car at Iowa Speedway last weekend (8/9 July), as the talented young Dubai, UAE-born ace struggled for speed in the 11th round of the fiercely-disputed Verizon IndyCar Series – but he is already planning to bounce straight back in Toronto.

Jones had competed around the bumpy, 0.894-mile oval twice in Indy Lights – finishing on the podium both times – but he knew that tackling it in a 720bhp IndyCar would be an altogether more challenging proposition. Underscoring his credentials, however – and following a productive pre-event test – the Dale Coyne Racing rookie returned to the track and lapped 13th-quickest amongst the 21 high-calibre protagonists during practice, despite driving with a fractured left foot.

He subsequently belied his early running slot – in a scenario in which track conditions generally improve as more rubber is laid down – to top the timesheets for a while in qualifying, and his impressive two-lap average of 182.290mph would ultimately prove good enough to snare a season-best eighth on the starting grid behind the wheel of his Dallara-Honda single-seater.

Unfortunately, a set-up change ahead of Sunday’s 300-lap Iowa Corn 300 backfired, leaving the reigning Indy Lights Champion waging a losing battle from the outset and despite his earnest efforts, he was powerless to prevent a slide down the order.

After dropping to the rear of the lead pack in 15th, Jones settled into a rhythm and enjoyed entertaining scraps with the likes of Josef Newgarden, Carlos Munoz and championship leader Scott Dixon. He had hauled himself back up to 12th when an ill-timed pit-stop just before the second caution period of the race cost him two laps and relegated him to the very tail of the field. Following a short stoppage prompted by a rain shower, the 22-year-old Brit gritted his teeth to take the chequered flag a frustrated 18th.

Wasting no time at all in dwelling on his misfortune, Jones is already en route to Toronto for the next outing at the pinnacle of US open-wheel competition this coming weekend (15/16 July), with the former European F3 Open Champion eager indeed to unleash his street fighting skills north of the border in Canada.

“It was good to have the chance to test at Iowa prior to the race weekend, but still we expected it to be difficult for the Honda teams, like it was in Phoenix,” he reflected. “That said, I was looking forward to it and having established a strong record on ovals – especially at Iowa in Indy Lights – the aim was to keep that form going.

"Qualifying went well, even though the track changed significantly from morning practice, which made it very tricky to drive. I think a lot of people struggled, but the DCR engineers did a good job deciding what to do with the car and we ended up eighth. Being such a short lap, you have to rehearse it in your mind before you go out there so you know exactly what to do, because it all happens so quickly. It's a lot of fun, and when you climb out at the end, you’re shaking a bit because it’s pretty extreme.

“We made some changes overnight with the race distance in mind and we were confident of coming away with another good result, but unfortunately, we went the wrong way on the set-up and struggled with oversteer throughout, which made the car a handful to drive.

“We tried to dial the oversteer out by reducing the front wing angle in the pit-stops, but the problem was more mechanical than aerodynamic so there wasn’t a great deal we could do. To then compound matters, we found ourselves caught out by the yellows just after we had pitted for the second time. It was a tough race all-told, but on the positive side, we brought the car home in one piece and we get to go again straightaway in Toronto.”