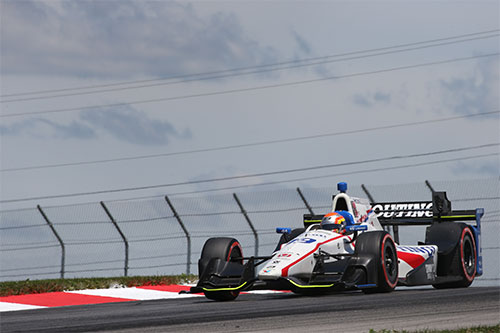 Ed Jones labelled his latest outing in the fiercely-disputed Verizon IndyCar Series at Mid-Ohio ‘a weekend to forget’, after a variety of misfortunes conspired to leave the championship’s standout rookie out-of-luck.

Jones travelled to the high-speed, 2.258-mile Mid-Ohio Sports Car Course with prior experience of its scenic and undulating nature from his brace of campaigns at Indy Lights level, and buoyed by a successful single-day test there the previous week with Dale Coyne Racing.

The talented Dubai, UAE-born ace completed 48 laps over the course of three preparatory practice sessions, winding up 15th-quickest amongst the 21 high-calibre contenders, just over half-a-second adrift of the outright benchmark. He replicated that performance in qualifying, although he was frustrated not to be further up the grid after finding his efforts hindered by traffic.

In the next day’s Honda Indy 200 – the 13th of 17 races in 2017 at the pinnacle of US open-wheel competition – Jones pitted early before working his way up to 12th. Unfortunately, his challenge then began to unravel, as the 22-year-old Brit found himself delayed by a problem with the right-rear tyre on his 720bhp Dallara-Honda single-seater during his third pit-stop on lap 58.

The loss of time dropped Jones to the rear of the field, and a subsequent spin as he endeavoured to regain ground only served to compound matters. The reigning Indy Lights title-holder and former European F3 Open Champion battled on to take the chequered flag a disappointed 21st.

“It was a difficult weekend,” acknowledged the Williams-Harfield Sports Group protégé, “all the more so since we had a really positive pre-event test at Mid-Ohio, during which our car seemed pretty fast compared to others that were there.

"Practice was a bit frustrating. We tried a few things, but they didn't go the way we wanted. There was also some traffic, as well as rain, which didn't help. Qualifying was tough, too. We got slowed slightly by a car in front, and then my car just got loose and I wasn't able to improve my lap time at the end to move up the order. There was more potential than we were able to show.

“To complete the hat-trick, finally, the race didn't go our way either! It’s very difficult to overtake at Mid-Ohio, the car was a little hard to drive, we had the issue in the pit-stop that sent me to the back of the field and then I had the spin that put me two laps down. It was a bit of a weekend to forget, all-in-all...”