Conditions conspire to blunt Jones' charge at The Glen 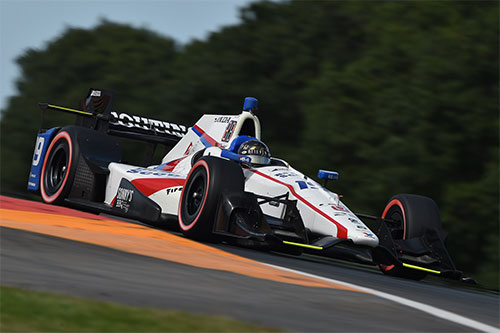 Ed Jones placed an unlucky 13th in last weekend’s INDYCAR Grand Prix at The Glen – the penultimate outing on the fiercely-disputed Verizon IndyCar Series schedule – as he was left to lament an unexpected change in conditions that denied him a better result.

Less than a week after being crowned IndyCar’s ‘Rookie of the Year’, Jones headed to the legendary, ultra-fast Watkins Glen International circuit in upstate New York in optimistic mood, having finished second there 12 months earlier en route to the Indy Lights title.

Unlike 18 of his 20 high-calibre rivals, though, the talented Dubai, UAE-born ace had no prior experience around the physically demanding, 3.37-mile permanent road course in an IndyCar, putting him somewhat on the back foot heading into the weekend’s three 45-minute practice sessions.

Logging 56 laps behind the wheel of his 720bhp Dale Coyne Racing Dallara-Honda single-seater, Jones wound up 18th in practice before improving to 15th in qualifying. With rain in the air ahead of the 60-lap race the following day, however, drivers and teams had some difficult decisions to make regarding car set-up.

A wet race was subsequently declared, obliging the 22-year-old Brit to take the start on wet tyres but with the track rapidly drying, the majority of the field – Jones included – darted to the pit-lane to switch over to slicks at the end of lap one.

With some drivers adopting a different strategy, the former European F3 Open Champion slipped to 19th after his second pit-stop, but he dug deep and despite having to contend with a car set up for wet weather, he fought his way through to 13th at the chequered flag to maintain 14th position in the points standings during his maiden campaign at the pinnacle of US open-wheel competition.

Following three back-to-back races, Jones now has a weekend off before returning to the fray for IndyCar’s 2017 season finale at Sonoma Raceway in California on September 15-17.

"It was good to go back to a road course, and Watkins Glen is among my favourite tracks in the United States,” reflected the Williams-Harfield Sports Group protégé. “That said, I knew it would be very different in an IndyCar, and difficult with all the G-forces through the high-speed corners.

"We had a decent morning on the first day, but we made some changes for the afternoon that didn't pay off at all and we struggled a lot in the second session. Nothing felt right, so we worked hard and improved the car again for Saturday – although obviously, it still wasn’t quite enough. I think we were a step behind. If the car had been like it was in qualifying in free practice, we would have been able to take another step forward and maybe be a bit further up, but 15th wasn’t too bad.

“We knew we could progress from there and move our way forward, but unfortunately, it was a tough race. The conditions didn’t go as we anticipated they would and being set up for rain, we were at quite a disadvantage, which made it tricky. I thought we would still be on for a decent result, but I ended up at the back of the field after my second pit-stop as some drivers were on a different strategy and it was an uphill battle from there. It’s a bit frustrating, but I feel like I drove pretty well and I had some good racing.”