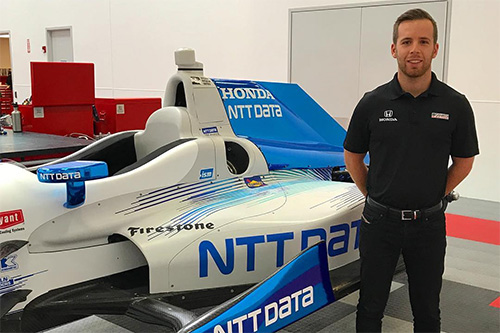 The 2017 INDYCAR Rookie of the Year scored a best finish of third at the Indianapolis 500 this season after taking the Indy Lights Championship in 2016 on the strength of two wins and nine podium finishes.

In 2016, Jones captured the Indy Lights title and the Mazda scholarship with two wins, eight podium finishes and eight pole positions. In 2015, he made the move across the Atlantic with Carlin Racing and into Indy Lights. Jones served notice of his title aspirations right out of the box, earning the first three race victories of the season – the first rookie driver to do so. He went on to finish third in the title chases. Prior to that, Jones earned several karting titles in his native Dubai before making his race car debut in the 2011 European Intersteps Championship. In 2013, Jones became the youngest European F3 Open Champion in history with six wins, 10 podium finishes and four pole positions.

Ed Jones, Driver, No. 10 NTT DATA Honda: “This is truly an honor to have the opportunity to drive for Chip, his organization and to represent NTT DATA. Chip runs one of the biggest and best motor racing teams in the world, and equally as important, is a proven winner across each series he competes in from Le Mans to Indianapolis and beyond. I want to get up to speed quickly and learn as much as I can. Scott is a legend in the sport, and to get the chance to team with him is an amazing opportunity. I think I’m joining the team at a perfect time when the playing field is being reset with common aero kits, and everyone is adjusting to a new formula. I'm really looking forward to getting in the car and getting underway with our 2018 campaign.”

Chip Ganassi, Owner, Chip Ganassi Racing: “We’ve been following Ed’s career for quite some time now and are pleased we are able to add him to strengthen our Indy car lineup. He has a year of Indy car racing under his belt now and is the type of young talent that we were looking for. We can’t wait to get him on the race track.”

Chip Ganassi has been a fixture in the auto racing industry for over 30 years and is considered one of the most successful as well as innovative owners the sport has anywhere in the world. Today his teams include four cars in the Verizon IndyCar Series, two cars in the Monster Energy NASCAR Cup Series, two cars in the NASCAR XFINITY Series, two factory Ford GT’s in the IMSA WeatherTech SportsCar Championship and two factory Ford GT’s in the FIA World Endurance Championship. Overall his teams have 18 championships and more than 195 victories, including four Indianapolis 500s, a Daytona 500, a Brickyard 400, seven Rolex 24 At Daytonas, the 12 Hours of Sebring and the 24 Hours of Le Mans. Ganassi boasts state-of-the-art race shop facilities in Indianapolis and Concord, N.C., with a corporate office in Pittsburgh, Pa.