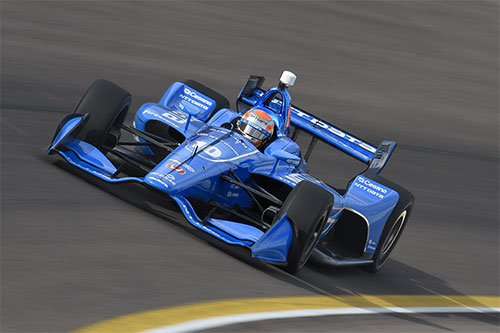 Ed Jones has hailed an ‘extremely positive’ first oval test with Chip Ganassi Racing at Phoenix’s ISM Raceway, as the talented Dubai, UAE-born ace ramps up his preparations towards his sophomore campaign at the pinnacle of US open-wheel competition in the Verizon IndyCar Series.

Having made the switch from Dale Coyne Racing to Ganassi over the winter off-season, Jones has focussed his efforts in recent months on settling into his new surroundings and getting to grips with the nuances of the universal aero kit that IndyCar has rolled out for 2018.

The bold new design produces significantly less downforce than drivers had at their disposal last year, reducing cornering stability and placing more emphasis on skill behind the wheel – a challenge that the 2016 Indy Lights Champion and 2017 IndyCar ‘Rookie of the Year’ is relishing.

Following an initial outing at Sebring International Raceway in Florida last month, Jones returned to the cockpit of his 720bhp Dallara-Honda single-seater for the eagerly-anticipated two-day ‘Open Test’ around Phoenix’s 1.022-mile oval – venue for the second round of the forthcoming campaign in early April – alongside 22 high-calibre rivals.

Over the course of 12 hours of on-track activity both during the afternoon and under the circuit floodlights after dark, the 23-year-old Brit covered a total of 283 laps. He featured as high as seventh on the timesheets and ultimately wound up 12th-fastest outright at an average speed of 187.696mph, less than a tenth-of-a-second adrift of four-time championship-winning team-mate Scott Dixon – the most successful driver in IndyCar’s modern era.

Jones has one test remaining – back at Sebring towards the end of February – before the 17-race season roars into life at St. Petersburg in Florida on 9-11 March. From there, the popular and fiercely-disputed series will visit a variety of demanding road courses, iconic street circuits and high-speed ovals – and the former European F3 Open Champion is fired-up to prove his potential.

“The test went really well,” affirmed Jones, who will pilot Ganassi’s No.10 NTT Data entry in 2018. “It was my first time running with the new aero kit on an oval, so there was a certain degree of adapting to do as we worked on finding the best set-up for the car, but we logged a lot of very solid laps and by the second day I felt much more comfortable and able to attack more.

“The new package is very different to last year, when we were pretty much flat the whole way round the lap on ovals. Now, due to the reduction in downforce, there is more lifting involved, which makes it more difficult to hold onto the tyres over longer stints. That will introduce more of a technical and tactical element into the driving, which I think will suit me well.

“We made a lot of changes over the two days and learnt and improved a great deal. Although we still have more pace to find and plenty to pick up in a short space of time, we’re heading in the right direction and I believe we left Phoenix in a much stronger position than when we arrived, both in terms of single-lap speed and race simulations, which is all extremely positive.

“I am confident we can be competitive from the outset at St. Petersburg next month, and I’m really looking forward to the season. I feel completely at home inside the team and whilst I’m under no illusions that it’s going to be tough – because the level in IndyCar is sky-high right now – I have a great opportunity with Ganassi this year and I fully intend to make the most of it.

“I don’t want to set myself any specific targets as such, because until we go into qualifying at St. Pete, we don’t know what the current pecking order is. That will be the first true litmus test, but I’m excited to get out there and see what we can do.”

The entire 2018 IndyCar campaign is due to be broadcast on ABC and NBCSN in North America, OSN in the UAE and BT Sport / ESPN in the UK, with an expanded use of in-car cameras set to bring fans closer than ever to the thrilling on-track action.