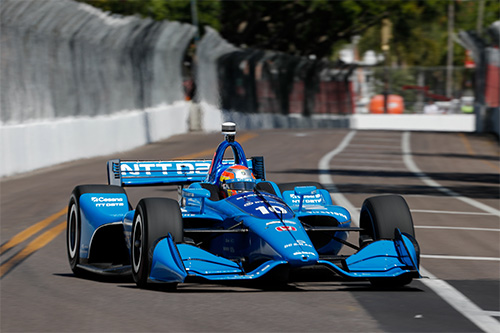 Ed Jones showcased his fighting spirit in the 2018 Verizon IndyCar Series curtain-raiser around the Streets of St. Petersburg in Florida last weekend (11 March), battling back from a difficult qualifying session to score a top eight finish on his Chip Ganassi Racing debut.

The talented Dubai, UAE-born ace – last season’s ‘Rookie of the Year’ – has switched camps to IndyCar powerhouse Ganassi for his sophomore campaign at the pinnacle of US open-wheel competition.

With limited testing opportunities for the 24 high-calibre contenders to get to grips with 2018’s new-look car – incorporating a universal aero kit that generates significantly less downforce than its predecessor and consequently reduced cornering stability – the first of 17 races on the calendar represented something of a leap into the unknown, and braking issues for Jones during free practice made it difficult to gauge the No.10 NTT Data entry’s true potential.

After working hard to improve the balance of his 720bhp Dallara-Honda single-seater, the 23-year-old Brit looked primed to move up the order in the knockout qualifying session around the 1.8-mile, 14-turn temporary street circuit through downtown St. Petersburg. Unfortunately, however, traffic scuppered his chances and restricted Jones to a disappointed 17th on the starting grid for Sunday’s 110-lap, 198-mile Grand Prix of St. Petersburg – albeit just three spots behind the defending race-winner.

Undaunted, the 2016 Indy Lights Champion went immediately on the attack when the green flag flew, gaining seven positions over the course of a superb opening lap. He would continue to feature around the fringes of the top ten as no fewer than eight full-course caution periods for a variety of incidents interrupted the action and threw strategies into disarray.

Along the way, Jones indulged in wheel-to-wheel scraps with the likes of reigning champion Josef Newgarden, fellow title-winners Will Power and Ryan Hunter-Reay and Tony Kanaan – the most experienced driver in the field with some 344 IndyCar starts under his belt – not to mention his own Ganassi team-mate, four-time champion Scott Dixon. Keeping illustrious company indeed, he would climb as high as fourth place through a combination of impressively quick lap times and incisive overtaking manoeuvres – 21 in all.

The erstwhile European F3 Open Champion made his third and final pit visit with 32 laps to go, and as tactics played out in the closing stages, he found himself sitting seventh, directly behind Dixon and just shy of ten seconds ahead of Newgarden. Carefully managing his fading tyres and the gap to his chasing Team Penske rival, Jones was maintaining a consistently strong pace and had the situation firmly under control until a brace of late safety car interventions narrowed his advantage to next-to-nothing, leaving him powerless to defend his position against a driver running on significantly fresher rubber.

Surviving the drama to take the chequered flag eighth – a nine-place improvement upon his grid slot – the former British Racing Drivers’ Club (BRDC) Earl Howe Trophy winner was justifiably pleased with his performance, and is already looking forward to seconds-out, round two in the Phoenix Grand Prix under the floodlights of Arizona’s ISM Raceway on 7 April.

“We got off to a tough start in practice, but it was the same for everyone with the 2018-spec car,” Jones reflected. “I think we all probably had less grip than we’d anticipated. That’s a new challenge, but one I’m certainly up for. I also got caught up in traffic, which meant my speed wasn’t reflective of the package I had underneath me but we weren’t too far off.

“After struggling a bit on Saturday morning, we reverted to what we had run on Friday and I felt more comfortable in qualifying, but we just missed out on advancing to the next phase by a fraction of a second after a car came out of the pits in front of us and deterred our progress. That was obviously frustrating, but we had a great first lap on Sunday and made up a lot of early ground. As a team, I think we were smart all day and drove a very solid race.

“You always go back and look at some things you may have been able to do better, but all aspects considered, I think my first race with Ganassi went well. It’s been an exciting start to the season, and now I can’t wait for Phoenix!”