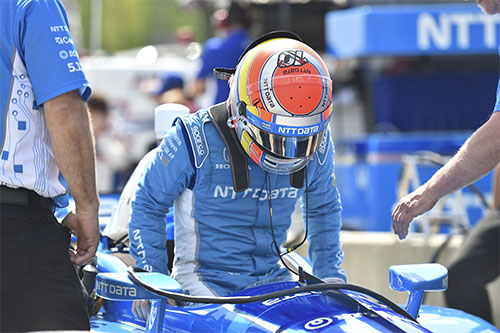 Ed Jones looked set to record a third top ten finish from four starts in the 2018 Verizon IndyCar Series at Barber Motorsports Park yesterday (23 April), until mechanical issues intervened and left the talented young Dubai, UAE-born ace to turn his attentions towards the celebrated ‘Month of May’ and the motorsport mecca that is Indianapolis.

Jones travelled to the picturesque 2.3-mile, 17-turn Alabama road course – a fast, flowing, undulating rollercoaster ride of a circuit – off the back of a superb maiden podium at the pinnacle of US open-wheel competition a week earlier around the Streets of Long Beach in California.

The 2016 Indy Lights Champion and 2017 IndyCar ‘Rookie of the Year’ immediately hit the ground running in the first free practice session behind the wheel of Chip Ganassi Racing’s No.10 NTT Data entry, overcoming understeer and a general lack of grip in windy conditions to lap fifth-quickest amongst the 23 high-calibre contenders. That placed him less than five hundredths-of-a-second adrift of four-time title-winning team-mate Scott Dixon – the most successful competitor in the current field and a man who had finished on the rostrum in seven of his eight previous starts at Barber.

Whilst FP2 and FP3 would prove to be more of a challenge, Jones subsequently advanced to round two of the knockout qualifying session for the first time this season, lining up 12th on the grid for the next day’s Honda Indy Grand Prix of Alabama.

“After such a great result at Long Beach, I was really excited to get back into the NTT Data car,” acknowledged the 23-year-old Brit. “I think I now have a better understanding of what I need to do from the start to the finish of a race weekend in terms of getting the car right, although it was a difficult end to the opening day for us at Barber – after going well in the morning, we struggled in the afternoon, possibly due to the heat.

“We talked to Scott [Dixon] and looked at the data and what we had learned from the car overnight, and I remained optimistic because we clearly had a good base set-up and just needed to do a little more fine-tuning. I then had a minor ‘off’ in FP3, after which we put on new tyres, but we never got a chance to show our speed as we kept hitting traffic.

“In qualifying, we were at a bit of a disadvantage as we had to run two sets of red-sidewall tyres, while the second group had a red flag, which enabled them to save a set. Tyres make all the difference at Barber, and we did the best we could with what we had.”

Following two completely dry days, Sunday dawned wet – very wet. With spray a real issue in the race and drivers tip-toeing their way around the treacherous track surface, Jones settled into a multi-car battle led by 2016 IndyCar Champion Simon Pagenaud, making his way up into the top ten by lap 14, one spot behind Dixon. The red flags then flew five laps later due to aquaplaning caused by rivers of standing water on the straights, and despite organisers’ best efforts, with the rain intensifying, the decision was ultimately taken to postpone the remainder of the race until Monday.

In far friendlier conditions 24 hours later, the former European F3 Open Champion again ensconced himself firmly inside the top ten from the outset. Running as high as sixth on a two-stop strategy, for a while, he lapped at the same pace as the leader – and eventual race-winner – in evidence of his potential.

Unfortunately, lap 66 saw Jones peel back into the pits due to mechanical problems with his 720bhp Dallara-Honda single-seater, consigning him to an early bath and forcing him to switch his focus to the famous ‘Month of May – comprising the IndyCar Grand Prix at Indianapolis Motor Speedway on 12 May and the iconic Indianapolis 500 a fortnight later.

“I tried to attack in the early stages of the race, but it was very difficult,” reflected the series sophomore, who is being coached this year by multiple IndyCar Champion and Indy 500 winner Dario Franchitti. “I just couldn’t see a thing, especially at the re-starts. It was probably the worst visibility I’ve ever known in a racing situation – I was going into corners blind and having to trust my feeling to judge when to brake. Maybe I could have been more aggressive or kept my foot down, but I didn’t think it was worth the risk in such tough conditions.

“We were making progress the next day, but we had mechanical issues and had to pit way before it was over. It was really unfortunate for our race to end that way, but on the other hand, the No.10 NTT Data crew did an amazing job once again. Our pit-stops and strategy were great, and we were on-course for another very strong finish.

“We’re heading in the right direction as a team and continuing to improve and try different tactics to get results. I understand these things take time and sometimes I get frustrated, but I know we have the tools to win and that’s the goal each weekend. Now we get ready for the biggest month of our season – IndyCar’s ‘Month of May’.”