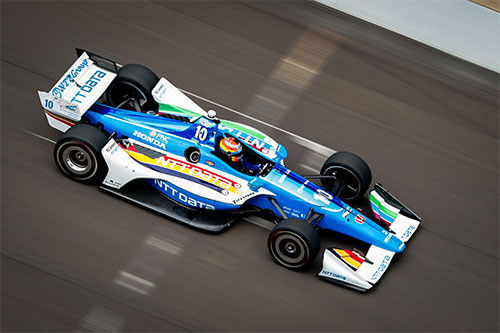 Not for the first time this year, Ed Jones saw a top ten finish slip through his grasp through no fault of his own in the IndyCar Grand Prix at Indianapolis Motor Speedway last weekend, but the talented Dubai, UAE-born ace is eager to quickly bounce back in the biggest race of the season later this month at the pinnacle of US open-wheel competition.

Sporting a refreshed livery on his Chip Ganassi Racing No.10 NTT Data entry, Jones travelled to the 2.439-mile, 14-turn permanent road course in bullish mood, having previously sped to a pair of pole positions and race victory there en route to the fiercely-disputed 2016 Indy Lights crown.

Ninth place in the first free practice session amongst the 24 high-calibre protagonists marked a promising start, although a lack of grip in the significantly higher temperatures of FP2 caused the reigning IndyCar ‘Rookie of the Year’ to slip to 14th. Qualifying would follow a similar theme, as Jones wound up just 15th behind the wheel of his 720bhp Dallara-Honda single-seater – albeit three spots ahead of ultra-experienced, four-time title-winning team-mate Scott Dixon, the most successful driver on the 2018 grid.

In the race, the 23-year-old Brit avoided a variety of opening lap incidents to immediately gain five spots, and once the action resumed following an early full-course caution, he remained on the fringes of the top ten right the way to his first pit-stop, as the Ganassi crew rolled the dice with a different tyre strategy to most of their rivals.

Despite grappling with understeer, Jones continued to feature firmly inside the top half of the field until he picked up a brace of left-side punctures with barely 20 laps remaining after running over debris from another car, prompting an unscheduled late pit visit that dropped him a lap off the pace and to the tail of the pack. From there, he went on to take the chequered flag a frustrated and entirely unrepresentative 22nd.

The former European F3 Open Champion has little time to dwell, however, with official practice for the 102nd edition of the iconic Indianapolis 500 next up this Tuesday, followed by qualifying to determine the 33-car starting order for ‘The Greatest Spectacle in Racing’ on 19/20 May. The race itself will be held a week later, on 27 May.

“Another weekend of what could have been,” rued Jones, who is being coached by multiple IndyCar Champion and Indy 500 winner Dario Franchitti. “It’s so frustrating to have races ruined by things outside of our control. It was quite a bit warmer than when we had last been to the circuit for testing earlier in the year, which made conditions tough and we struggled to get the balance of the car right in practice and qualifying.

“We worked hard overnight, though, and I got a good start in the race to move up several positions. I think we had good pace at the beginning but in the later stages, we must have just run over something and the tyres went down – the car behind us had the same problem.

“It obviously wasn’t the outcome we wanted, and we’ve had a difficult run over the past couple of weeks but there is a lot of potential and I’m excited for what is to come. The whole team at Chip Ganassi Racing has done a great job with pit-stops and strategy so far this season, and we are on the right track and hope to start scoring big results soon.

“Now, all of our attentions are turned to the main event of the year – the Indianapolis 500. It’s a race that holds very happy memories for me from last season, and I’ll go back there with my sights resolutely set on fighting at the front again.”