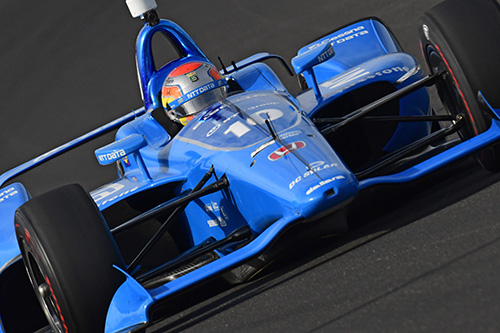 Ed Jones is confident he has ‘a good race car’ underneath him as he prepares to tackle the biggest event on his 2018 calendar this weekend, after safely qualifying for ‘The Greatest Spectacle in Racing’ – the legendary Indianapolis 500 (27 May).

The talented young Dubai, UAE-born ace is currently five races into his sophomore season in the fiercely-disputed Verizon IndyCar Series with Chip Ganassi Racing, sitting 14th in the standings amongst the 28 high-calibre contenders, with a brace of top ten finishes to his credit including a breakthrough maiden podium around the Streets of Long Beach last month.

Whilst that marked Jones’ first visit to the IndyCar rostrum, it was not his first top three result – that came this time last year on his Indy 500 debut, as he grabbed headlines with a mature, composed and phenomenally impressive performance that belied his comparative lack of experience at the pinnacle of US open-wheel competition.

Fast forward 12 months, and the 2016 Indy Lights Champion and 2017 IndyCar ‘Rookie of the Year’ is back at Indianapolis Motor Speedway, where last week, he completed four days of official practice including ‘Fast Friday’, when boost levels on the cars’ turbocharged engines are turned up in advance of qualifying, equating to an increase of almost 50bhp around the iconic 2.5-mile oval.

The track time was split between getting comfortable in the car, adapting to driving with a full fuel load, qualifying simulations and running in a pack to get accustomed to how the new IndyCar reacts in traffic with its distinctly different aerodynamic package compared to its predecessor.

“We spent a lot of time focussing on the balance of the car – that was the main thing,” revealed Jones, who put a total of 263 laps on the board and reached a top average speed of 228.646mph. “There are so many variables to try to make it fast, and we went through a lot of tweaks – every day, we learnt something new and we improved the No.10 NTT Data car each time. The crew did a fantastic job working on the car and going back and forth to the garage with all the changes we made.”

Qualifying was a two-stage affair, and with 35 cars vying for only 33 available berths, ‘bumping’ made a re-appearance at Indy for the first time since 2011. That ratcheted the pressure up a notch in what was already a high-stakes scenario, with each driver afforded just four nail-biting laps – and rain delays disrupting strategies to add to the challenge.

The first day was dedicated to securing a spot on the grid, which Jones did comfortably by placing 13th on the timesheets, just five positions behind four-time title-winning team-mate Scott Dixon, the most successful competitor in the current IndyCar field and the 2017 Indianapolis 500 pole-sitter.

“The guys did a great job with the NTT Data car,” acknowledged the 23-year-old Brit, who is being coached by multiple IndyCar Champion and Indy 500 winner Dario Franchitti. “We struggled a bit on Friday trying to find qualifying pace, and ran about 50 laps alone on qualifying set-ups. It’s great to be with this Ganassi team, because they constantly work at it and push to find speed. I think we got a little unlucky with the sun coming out during our run. That definitely hurt our pace a bit, but considering our difficulties on Fast Friday, I had to be happy with 13th.”

Hopes were high of maintaining if not indeed improving upon that form on Sunday, when all drivers having provisionally qualified between tenth and 33rd made a further four-lap attempt to determine the final starting slots for the 200-lap race.

Unfortunately, a small error on his third lap restricted Jones to a frustrated 29th on the grid behind the wheel of his 720bhp Dallara-Honda single-seater – but he remains upbeat about his prospects of moving forward in the 102nd edition of what is the largest single-day sporting event in the world.

“I went into Turn One and just lost the front of the car,” explained the former European F3 Open Champion. “I was heading for the wall on the exit so had to lift, which destroyed my momentum. That lap really hurt my average and it was very disappointing to have that happen, especially after having a solid car on Saturday.

“I felt so bad letting the team down, but we have a good race car that drafts up very well to the other cars – maybe even better than the one I had last year – and we’re determined to work our way to the front.”