Jones endures tricky weekend as Pocono lives up to its name 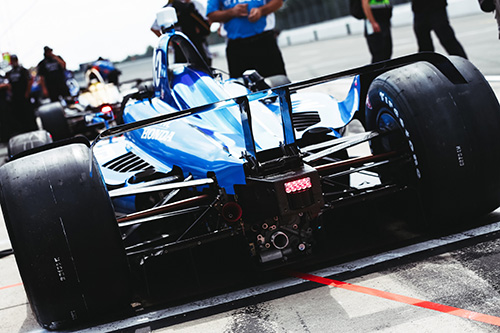 Pocono Raceway is known in Verizon IndyCar Series circles as the ‘Tricky Triangle’ due to its challenging and unforgiving nature, and for Ed Jones, it more than lived up to that notorious moniker last weekend (18/19 August), as misfortune denied the talented young Dubai, UAE-born ace a strong finish.

Competing for Chip Ganassi Racing in his sophomore season at the pinnacle of US open-wheel competition, Jones has been consistently on the pace in 2018 but all-too-often out of luck behind the wheel of his 720bhp Dallara-Honda single-seater – and Pocono would serve up a similar story.

The unique, 2.5-mile triangular Pennsylvania oval played host to the 14th round of the campaign, and the former Indy Lights Champion and reigning IndyCar ‘Rookie of the Year’ overcame understeer to lap at an average speed of 216.547mph in qualifying, thereby putting the No.10 NTT DATA entry 12th on the grid amongst the 22 high-calibre contenders for Sunday’s ABC Supply 500.

That placed Jones ahead of the likes of championship-leading team-mate Scott Dixon, Tony Kanaan – the most experienced driver in the current field – and oval specialist Ed Carpenter, and right behind 2017 pole-sitter Takuma Sato.

A long, punishing, 200-lap race lay in wait – although nobody could have predicted just how punishing it would be. A start-line collision towards the back of the pack instantly precipitated a full course caution, and at the second attempt to get proceedings underway, contact between Robert Wickens and Ryan Hunter-Reay sent the former spinning through the air and into the catch-fencing, bringing out the red flags.

Thankfully extricated from his car awake and alert, the Canadian was subsequently airlifted to hospital, where he is being treated for injuries to his lower extremities, right arm and spine as well as a pulmonary contusion.

Following a two-hour delay, Jones was due to take the re-start from eighth position, but he was immediately forced to pit to allow the Ganassi crew to replace his front wing and repair damage caused by debris from the accident. With teams not permitted to work on the cars under red flag conditions, the setback cost the 23-year-old Brit a lap in relation to the vast majority of his rivals, leaving him down in 15th and playing catch-up throughout.

Thereafter, he was routinely one of the quickest drivers on the circuit and ultimately regained three places to cross the chequered flag 12th, with a late charge bringing him to within a second of the driver ahead in 11th. A better fastest lap than four-time title-holder and erstwhile Pocono winner Dixon – who eventually finished third – proved Jones’ potential and what might have been.

The result nonetheless elevated the 2013 European F3 Open Champion a spot in the overall standings as he switches his focus now to the next outing on the fiercely-disputed IndyCar schedule – the Bommarito Automotive Group 500 at Illionois’ Gateway Motorsports Park on Saturday, 25 August.

“Pocono is one of the toughest ovals you’re ever going to encounter,” reflected Jones, who is being coached this year by multiple IndyCar Champion and Indianapolis 500 winner Dario Franchitti. “It’s nicknamed the ‘Tricky Triangle’, which really sums it up and I was looking forward to the challenge – especially after two weekends away from the track.

“You’re always a little disappointed when you don’t line up near the front of the grid, but both CGR cars struggled a bit in qualifying – and with the final practice session being rained off, we didn’t get a lot of pre-race track time over the weekend, which limited the improvements we could make to the NTT DATA entry.

“The start of the race was pretty crazy, but we made it through. Obviously, we sat and waited for a while after the accident and it was great to hear the positive news on Robert [Wickens]. We picked up some damage and had to make repairs when we got going again. We went laps down after that, and from there just tried to adjust the NTT DATA car the best we could to get the most out of it.”