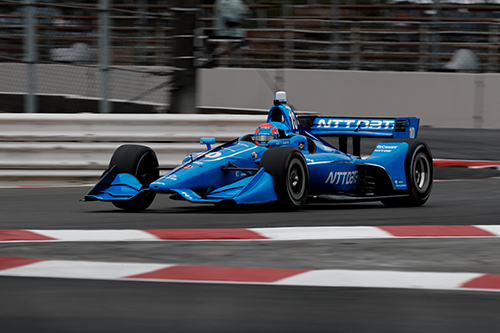 Ed Jones produced Scott Dixon-beating pace in the penultimate round of the fiercely-disputed Verizon IndyCar Series at Portland International Raceway last weekend (30 August - 2 September), but the talented young Dubai, UAE-born ace was denied the opportunity to convert that into a strong result after getting caught up in somebody else’s incident on the opening lap of the race.

The Grand Prix of Portland marked IndyCar’s return to the Pacific Northwest for the first time in more than a decade, with all drivers taking part in a pre-event test to either familiarise or re-familiarise themselves with the 12-turn, 1.964-mile permanent road course. Putting a total of 57 laps on the board, Jones wound up eighth-quickest amongst the 25 high-calibre protagonists – just over a third-of-a-second shy of the outright benchmark.

The 2016 Indy Lights Champion and 2017 IndyCar ‘Rookie of the Year’ remained in or around the top ten throughout free practice in Oregon – always well within striking distance of Chip Ganassi Racing team-mate Dixon. He then proceeded to out-qualify the New Zealander by more than two tenths-of-a-second to secure eighth spot on the starting grid for the race, breaking the lap record along the way with the fastest time of anybody in the first phase of the knockout session.

Not only is Dixon the current championship leader, but he is a four-time title-winner and – with 44 victories on his career CV – the third-most successful IndyCar driver ever, making Jones’ performance in equal machinery all the more impressive.

With a large crowd lining the circuit banking, the 23-year-old Brit was optimistic of a competitive showing the following day, but his race unfortunately did not last more than the opening sequence of corners, as he found himself collected in a multi-car accident sparked by a collision between James Hinchcliffe and Zach Veach immediately ahead. In the ensuing pile-up, the car of Marco Andretti flew over the top of Jones’ 720bhp Dallara-Honda single-seater – thankfully without any injuries.

The same, however, could not be said for the No.10 NTT DATA entry, with suspension damage forcing Jones out of contention on the spot. He is now fully focussed on signing off his sophomore season at the pinnacle of US open-wheel competition in style in the 2018 finale at Sonoma Raceway, California on 16 September.

“It was another weekend that sums up our year so far,” rued the former European F3 Open title-holder, who is being coached by multiple IndyCar Champion and Indianapolis 500 winner Dario Franchitti. “IndyCar has a long history at Portland, and it was good to see that tradition return but things didn’t go our way again.

“I wasn’t happy in practice; we weren’t where we needed to be, but we worked hard overnight to ensure the NTT DATA car would be further up the speed chart in qualifying, which was a tough session. We were quickest in the first group in round one, which was obviously good, but after that, I think with the way the track played out we went the wrong way on the balance and that hurt us. It left us battling too much understeer in the second session, and we didn’t quite have enough to advance to the Firestone Fast Six.

“Then in the race, I was simply caught up in a lap one crash that I had no chance of avoiding. It looked like Veach and Hinchcliffe were side-by-side going into Turn Two and Veach just turned right into him like he wasn’t there. He didn’t give any room and it caused a huge shunt. Andretti flew over my head and maybe even nicked my helmet.

“I’m just glad Marco was ok and no-one got hurt in all that. I’m ok too, but really disappointed for the NTT DATA crew. We were in strong shape and hoped we would be up at the sharp end in the race. Now we move on to Sonoma, and I’m confident we can make something happen there.”