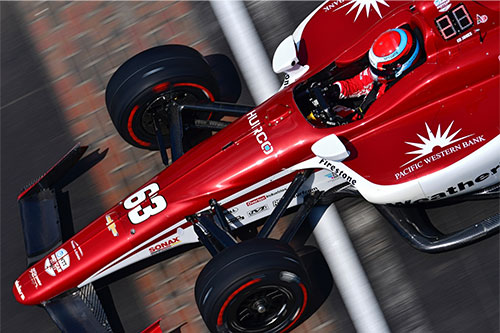 Jones has matched his career-best NTT IndyCar Series starting position with today’s effort. He burst onto the scene with a third-place finish in his Indianapolis 500 debut in 2017. In addition to being the highest finishing rookie in the field, he went on to win the NTT IndyCar Series Rookie of the Year title. Last year, Jones collected two more podium finishes with Chip Ganassi Racing before joining Ed Carpenter Racing with Scuderia Corsa. The 24-year-old is also coming off of his best finish of the year as he took the checkered flag 6th in last weekend’s INDYCAR Grand Prix.

The 2019 Fast Nine Shootout was delayed nearly four hours as rains moved through the Indianapolis Motor Speedway area. Instead of starting at 1:15 p.m. ET, the first Fast Nine challenger rolled out at 5:01 p.m. Drivers in the Fast Nine had to make one four-lap attempt, in order based on slowest to fastest from yesterday’s qualifying times.

Ed commented: "It was a good day. I qualified 4th for the Indianapolis 500! It’s great for myself, Scuderia Corsa and Ed Carpenter Racing. Having three cars at the front is really positive. Of course, you always want to be on pole, but regardless it’s great to be up front. It will give us a great chance for the win next Sunday and that's what it’s all about!”