Jones to Drive No. 18 Team SealMaster Dale Coyne Racing with Vasser Sullivan for 2021 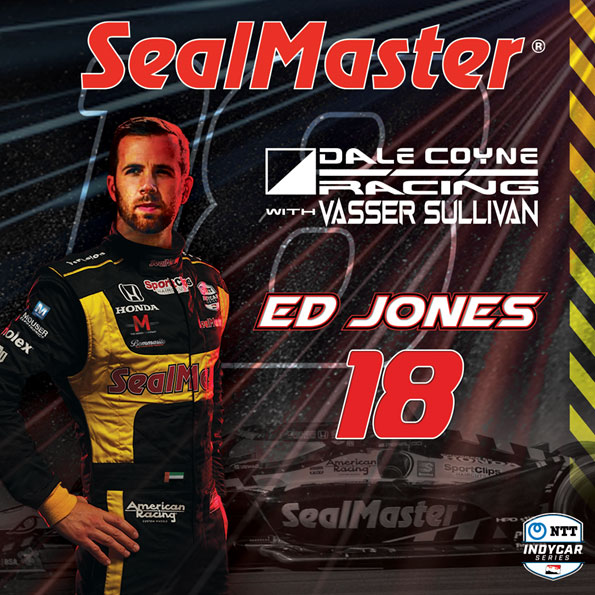 The team also announced that, for the fourth consecutive season, the car will carry primary sponsorship support from SealMaster Pavement Products and be entered as the No. 18 Team SealMaster-Dale Coyne Racing with Vasser Sullivan Honda.

Jones is the 2017 IndyCar Rookie of the Year and was the top-rookie finisher in the 2017 Indianapolis 500, placing third. He is also the 2016 Indy Lights Champion. Jones has made 47 IndyCar starts earning 14 top-10 finishes including three podium performances, the third at Indy in 2017, and third at Long Beach and Detroit Race 2 in 2018. Jones, 25, was born in Dubai, United Arab Emirates (of British citizenship) and currently resides in Miami, Florida.

Quotes:
Dale Coyne, Team co-owner Dale Coyne Racing w/ Vasser-Sullivan:
“We’re very happy to have Ed Jones back with us and back in the NTT IndyCar Series this season. We were sad to see him leave after his first time with us but we’ve kept in touch since. Ed had a great rookie season at DCR in 2017, which included our best finish of third at the Indianapolis 500. Now with DCVS, we hope to continue where we left off with him and look forward to a strong season.”

James “Sulli” Sullivan, Team co-owner Dale Coyne Racing w/ Vasser-Sullivan:
“We’re full steam ahead having Ed Jones join us, and taking over the driver responsibilities for the No. 18 Team SealMaster machine. Ed has had some big moments in IndyCar, and we expect you’ll see some big moments with us together in 2021.”

Ed Jones, Driver No. 18 Team SealMaster – Dale Coyne Racing w/ Vasser-Sullivan Honda:
“I’m really excited to join the Coyne Vasser Sullivan team for the 2021 NTT IndyCar season. I started my IndyCar career with Dale, Jimmy and Sulli have had much success as owners together, and the combination of Coyne, Vasser Sullivan is a proven team over the last 3 seasons. I’m pumped for the opportunity to drive the #18 SealMaster machine and represent the SealMaster franchisees across the country, this really is the perfect opportunity.”

Jason Hedlesky, SealMaster Director of Franchise Development:
“We’ve enjoyed a successful partnership with the team. It’s been great for our brand. Renewing our commitment affords us the opportunity to keep SealMaster in the national spotlight of IndyCar racing, and on its international stage, as well.”