Ed makes it three-from-three with victory at Long Beach 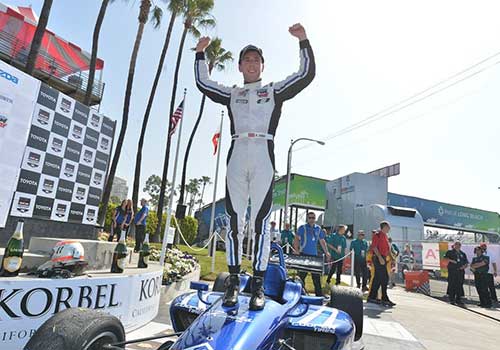 Jones, who is from Dubai, qualified his No. 11 Toys for Boys Miami/United River car fourth yesterday on the 1.968-mile, 11-turn street circuit. When the green flag was shown for the 42-lap race, the Carlin driver took advantage of the accident ahead of him and sat in second when the yellow flag was shown.

Jones then had a fantastic restart to take the lead from Felix Serralles and was able to build a gap of just over a second before another yellow was shown. Jones was then forced to work hard to maintain his lead over Spencer Pigot but drove faultlessly to take his third Indy Lights victory in as many races.

“I knew it was going to be a bit hectic at the start because the temperatures were cold, the tires were cold,” said Jones. “I didn’t get the best start and dropped back to fifth. But then I saw the collision happening up front, so I braked a little bit earlier, took the inside and got around to the left. I got around Felix on the restart and we had a good battle for the next few laps.”

Then I had to deal with Spencer. You don’t want to make any mistakes, but you have to push really hard. It’s hard, because if you’re too conservative, you’ll get caught. It was difficult; I risked it a bit but fortunately, I didn’t make any mistakes and that’s what kept me the lead. We struggled with pace this weekend. We didn’t have the fastest car so to come away with the win is fantastic,” added Jones.

Jones, a multiple UAE karting champion, has had a sensational start to his Indy Lights debut. At the season-opener on the streets of St. Petersburg, three weeks ago where the 20 year old won both races from pole and broke the track record. With his win in Long Beach, he picked up another 31 points and now has a total of 95 points in the championship standings.

Rounds 4 and 5 of the Indy Lights Presented by Cooper Tires season will be at Barber Motorsports Park in Leeds, Alabama, April 24-26.