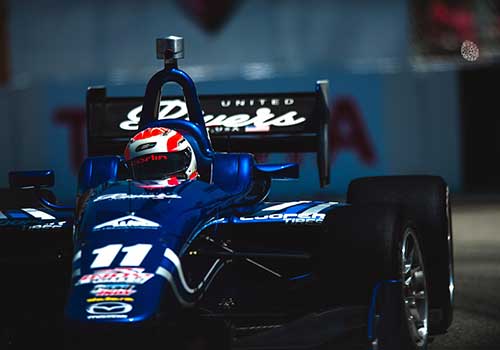 INDIANAPOLIS (USA) 15 APRIL 2015: Dubai born and bred Ed Jones is looking to have another Indy Lights victorious weekend when he gets back on track for the Long Beach Grand Prix, April 19, on the streets of downtown Long Beach, California

Driving the No. 11 Toys for Boys Miami/United River car on the 1.968-mile historic street circuit, the 20-year-old was unstoppable in the Indy Lights Presented by Cooper Tires season-opener at St. Petersburg two weeks ago. Despite having never driven that circuit before and it also being his and his team, Carlin Racing’s debut in the series, Jones won pole for race one and two and then went on to dominate and win both races by a clear margin.

“I am really looking forward to the race at Long Beach this weekend,” said Jones who mad a brief visit to his home in Dubai after his opening round success. “Although it’s only been two weeks since the last race it already feels far too long to be out the car, especially after the success at St Pete. The team and myself have worked extremely hard to prepare for Long Beach and I am confident we can produce another great result.”

Jones made the switch to Indy Lights and the USA at the beginning of the year after becoming the youngest winner of the Euro F3 Open Championship in 2013. Last year, despite missing three races mid-season races due to back injury, he still earned two podium finishes in the FIA European Formula 3 Championship with Carlin.

The Long Beach Grand Prix weekend, at the legendary street circuit which in the past has hosted Formula 1, starts with Free Practice on Friday 17 April, with more practice and Qualifying the following day and the race on Sunday 19 April.