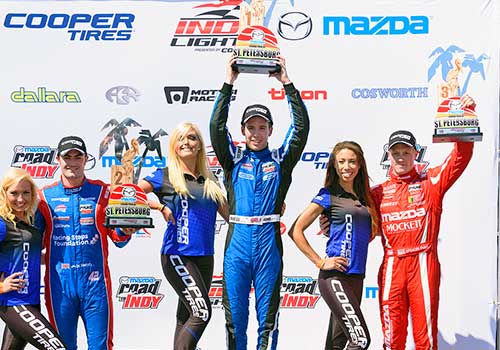 ST. PETERSBURG (USA) 30 MARCH 2015: The changing of the guard in Indy Lights was readily apparent in the two races that comprised the 2015 Mazda Grand Prix of St. Petersburg Presented by Peninsula Pipeline.

The top level of the Mazda Road to Indy debuted a brand-new Dallara IL-15 chassis and 2.0-liter turbocharged Mazda MZR-R engine, so perhaps it was appropriate that a rookie team and driver should take the top honors. In this case it was Dubai based Ed Jones and European powerhouse open-wheel team Carlin which showed the way with a dominating performance.

Jones, 20, obliterated the old Indy Lights lap record in qualifying, setting the pace with a lap at 1:05.3193, more than a second inside the old record set in 2010 by current Verizon IndyCar Series star James Hinchcliffe.

Jones duly continued that form in the race, taking the lead at the start and then, following a full-course caution on Lap 2 due to an incident involving Max Chilton (Carlin) and Felix Serralles (Belardi Auto Racing), edged clear almost at will.

His final margin of victory after 30 laps was a comfortable 3.7085 seconds over last year’s championship runner-up Jack Harvey (Schmidt Peterson Motorsports with Curb-Agajanian).

A day later, Sunday, Jones cruised to his second victory of the weekend in Race 2 of the Indy Lights Mazda Grand Prix of St. Petersburg.

The UAE born and bred driver once again started from pole and had a strong start, to hold the lead going into Turn 1. Jones did have some pressure for the first 20 laps from second place Jack Harvey, but a lap later posted the fastest lap of the race, 60.866 seconds, and then looked back, cruising to victory by 9.0708 seconds

He reflected: “The car was great throughout the race. It was the longest race I’ve ever done but it felt quicker than yesterday’s race somehow. I just had to focus, keep pushing and not make any mistakes. What won the race for us was consistency, making sure I took care of the tires. But it’s all come down to the hard work and dedication the team and I have done through the past few months.”

“The preparation for this race was massive; we did so much work so that when we got out on the track, we would be fast straight away. I studied older on-boards, YouTube videos, made my own notes and visualized the track so that when I got here, it was almost like I’d driven it a hundred times. But it is a different kind of race for me, to be on a street circuit with concrete walls all around!”

Jones made the switch to Indy Lights and the USA at the beginning of the year after becoming the youngest winner of the Euro F3 Open Championship in 2013. Last year, despite missing three races mid-season races due to back injury, he still earned two podium finishes in the FIA European Formula 3 Championship with Carlin.

Jones will return to street course action with Carlin Racing in Long Beach, California on 19 April.