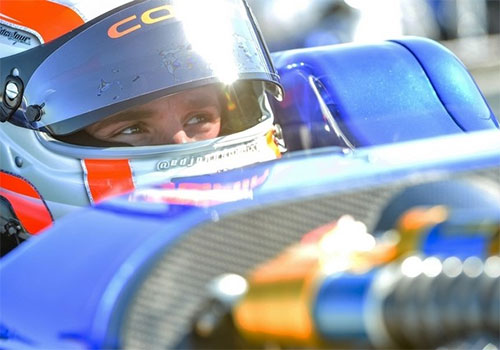 With the world in the UAE today for the Abu Dhabi Desert Challenge and the Dubai World Cup, on the other side of the globe one of the country’s most promising prospects will tackle another major international race with a good chance of producing a victory.

Jones, who only relocated to Miami in January and had his first drive on an oval just last month, will start the first round of the IndyCar feeder series as one of the least-experienced drivers in the field, but he has shown early pace and promise.

“A lot of the other teams have driven on these circuits before, and almost all the drivers have done at least a year or two on this street circuit, so they definitely have that advantage,” said Jones, who will drive a turbocharged, two-litre Mazda MZR-R-powered Dallara IL-15.

“I’m sure we will catch up quickly.”

Jones, 20, finished fastest at the final test of the pre-season, in Alabama, narrowly ahead of his Carlin teammate, Max Chilton, who last year drove in Formula One with Marussia.

The former Dubai College student said he goes into the weekend believing the top step of the podium is attainable.

“Judging by testing, we have to be aiming high,” he said. “The main aim is to win, and I don’t see a reason why we can’t do that if we get everything right.

“But it’s a long season and consistency is key to winning this championship. For that reason, podiums in both races would be a great way to start.”

Jones had never visited St Petersburg, which has closed its streets for this weekend’s two races. He has, though, dreamt of lifting the trophy.

“You always do,” he said. “It has come into my head a lot of times in the past few weeks. You want to set your targets high, but without putting too much pressure on yourself.

Chilton, 23, raced for two seasons in F1, but the elite racing series generally relies on rookie drivers using sponsor money to pay for a seat.

Jones decided on the more economically robust American motorsport route, where the past four winners of the Indy Lights championship have graduated to IndyCar Series, the top open-wheel racing series in North America.

“If I win the championship this year, there is no reason why I can’t be in IndyCar next year,” said Jones, who was the 2013 European F3 Open ­champion.

“Max obviously has a lot of expectations on him because he has, by far, the most experience out of anyone, but it’s just another factor that motivates me.

“This first race is, hopefully, where we’ll see exactly how fast the car is and I look forward to showing what I can do.”