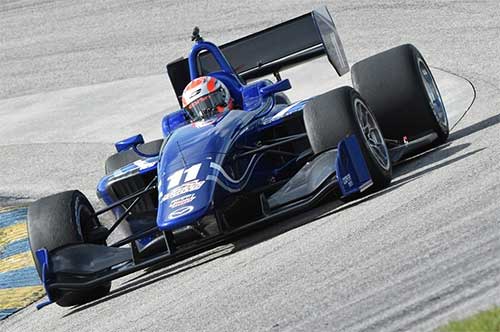 The Dubai born and bred resident was quickest on both days, eclipsing his ex-Formula 1 teammate Max Chilton and some of the leading drivers in the series, while making an instant name for himself Stateside where he will be focusing his career in 2015 and beyond.

At the end of day two of testing the Mazda-powered Dallara IL-15 at the Homestead road circuit configuration, Jones said, “I think I adapted well to the car which was a good start. I wasn’t really expecting anything as such before the test.”

“The main thing that was different for me was the turbo and getting used to the turbo lag. The car has more power than I’ve driven before. I got some good feedback on the tires and I think I’ve got a good handle on how they work which is a good sign for the season ahead,” added the 19 year old.

After two days on the road course Jones gets his first taste of oval racing at the same venue (on Thursday) – a challenge he is relishing.

“The ovals are obviously going to be the biggest learning step for us, so I’m excited about this new challenge. The key will be to build up gradually and not make any mistakes,” mused Jones.