Points but heartache for jones in Nurburgring 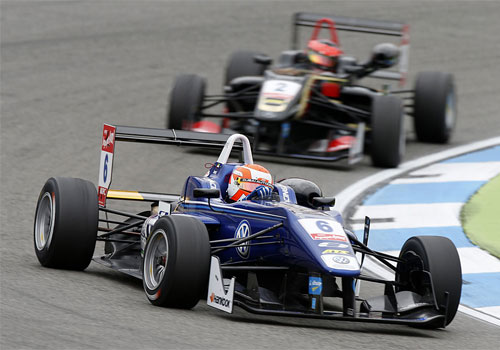 Ed Jones endured a mixed weekend at the Nurburgring in Germany, as the 2014 FIA Formula 3 European Championship continued with the ninth event of the season.

19 year-old Jones was on the pace from the start of the weekend, a strong practice session was backed up by a stunning qualifying performance, putting his Carlin run Dallara F312 second on the grid following Friday’s qualifying session, despite only just returning to the racing action from a back injury. Despite mixed and damp conditions, the majority of the field started race one on Saturday on slick tyres, as a dry line looked to be forming around the circuit. Nevertheless conditions remained tricky, with one driver spinning on the formation lap. Jones stayed on track, but starting on the wetter side of the track lost several positions to drop to sixth on the first lap and was 13th by lap seven. The Emirati man recovered to 10th place by the chequered flag with a determined fight back.

While Jones and his peers were ready and waiting for Saturday afternoon’s qualifying session to take place – setting the grid for races two and three – marshals were working hard to fix the Armco barrier damaged in an earlier Sirocco session. With a repair deemed not possible in the time remaining, the F3 qualifying session was postponed to Sunday despite the drivers ready and waiting in the pit lane. An early start on Sunday at least brought clear and sunny skies after Saturday’s wet running, and Jones and his rivals were soon on track for the 20 minute qualifying session. Jones was competitive in a close session, setting the ninth fastest time – the position he would take on the grid for race two. Only a few hours later, the 2014 FIA F3 field lined up for race two at the German circuit. Despite a dramatic looking sky the conditions remained dry, with Jones holding onto ninth on the first lap. Becoming increasingly uncomfortable in the cramped F3 cockpit with his still healing cracked vertebrae, Jones nevertheless held onto ninth, which became eighth after race leader Max Verstappen retired. Jones managed to take eighth at the flag despite being in pain, taking more solid points.

Following conversations with the team, Jones made the decision to sit out the final race of the day, thereby preventing any possible further damage to his back, which was injured in an accident at Pau earlier this year. Jones and his team will take a decision on the remainder of the season in due course.

Speaking about Jones’ withdrawal from race three, Team Principal Trevor Carlin said, “Ed found he was in some discomfort after the second race so made the decision to sit out the final race of the weekend to be on the safe side. We wish him a speedy recovery and hope to see him back in the car again soon.” Jones added, “It’s really disappointing that I wasn’t able to complete the weekend but I knew during race two that it wouldn’t be the right thing to do. The F3 cockpit is a very physically challenging environment and it’s hard enough to achieve your maximum potential normally, without the added distraction of pain and possible further injury. We had a good car this weekend so it’s disappointing we weren’t able to make the most of that. I’ll see how I feel in a week or so and take some medical advice. We have a really big gap now until the next race in October, so there’s plenty of time to rest and make a decision on the final two races of the season.”