Strong comeback for Jones in Austria 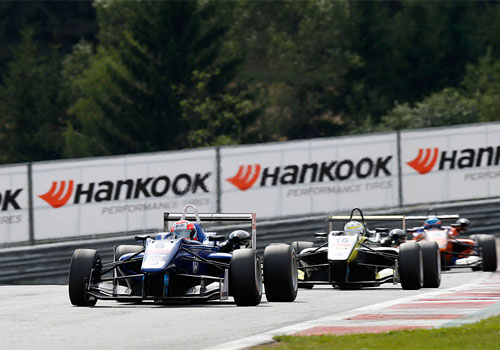 Ed Jones has taken a strong double points finish in his comeback weekend of the FIA Formula Three European Championship. Coming off the back of a dominant race weekend in the British Formula Three Championship, the UAE based racer was confident of being able to get back up to speed in his regular racing series. His pace failed to disappoint and it was clear that he wasn’t letting his time away from the series hamper his racing instinct. Over the course of the weekend Jones claimed three top ten starts and finished the second and third races of the weekend in a solid sixth position overall.

For Jones this weekend’s FIA Formula Three European Championship round at the Red Bull Ring marked his comeback to the championship having missed the previous three rounds due to an injury sustained during the Grand Prix de Pau. On Friday morning it was clear that the incident was well and truly behind him as he set the ninth fastest time in free practice as he got back up to speed in the championship.

Carrying this progress through to the first 20 minute qualifying session of the weekend Jones set the tenth quickest time in his Volkswagen powered Carlin Dallara car. Jones said of the day, ‘It was good to be back in the championship first and foremost. We were running on older tyres in the morning practice session but I was feeling confident in the car and although we caught quite a bit of traffic I felt pretty good. For qualifying, it was pretty reasonable for us. I had been running higher up the grid but lost a lap due to track limits so although we had the pace it didn’t really happen for us but it was so good to be back on it again.’

However Jones’ one bit of bad luck was to follow on Saturday morning when, while running within the top ten, his car became temporarily stuck in gear; he was however able to make it back to the pit lane where the team worked hard on fixing the problem. Despite losing valuable laps he was able to re-take to the track for some more running.

Thankfully for Jones he had another qualifying session in which to set his grid positions for the final two races of the weekend. Once again, he was on the pace from the very start of the session and as the flag fell to mark the conclusion of the 20 minutes of on track action he had set the tenth fastest time overall. ‘I think the track changed a lot,’ said Jones, ‘I tried to adapt to this but I struggled a little bit however with the conditions I think tenth was still a good result. Although it felt like we should be further up there we will of course fight during the two races tomorrow to work further up in to the points.’

Despite fears that Sunday would throw up some interesting weather conditions there were glorious blue skies as the first race of the weekend got underway. Fighting from tenth on the grid Jones ensured that he placed his car exactly where it needed to be in the opening laps. Enjoying a fantastic battle with Dennis Van de Laar Jones once again proved his pace and was soon running in seventh overall. In the dying laps Antonio Giovinazzi was handed a drive through penalty which meant that Jones claimed sixth position and a strong haul of points as his own.

Jones’ brilliant weekend would continue for the third and final race where, despite losing a couple of positions on the opening lap, the Carlin driver pressurised those ahead perfectly which saw him right behind team mate Jordan King by the mid-point of the race. Jones gave it a final push in the last laps and made his way past King and soon found himself further up the order as drive through penalties were applied. This strong result would see him take his second sixth place finish of the weekend in what has been a fantastic return to FIA Formula Three European Championship racing.

Speaking of the final two races Jones said, ‘The first race was really good for us because we were able to make so many places up however we were fast in certain places on track and others were quicker elsewhere so it was tough to overtake. But getting sixth was great and then to get sixth position in the second race was also a really strong result for me. I’m so happy with the progress we made over the weekend and now feel as though I have picked up in the Championship from where I left off before the injury. I’m now looking forward to the next round in Germany where I’ll be fighting to continue this progress.’