Triple victory for Jones at Spa-Francorchamps 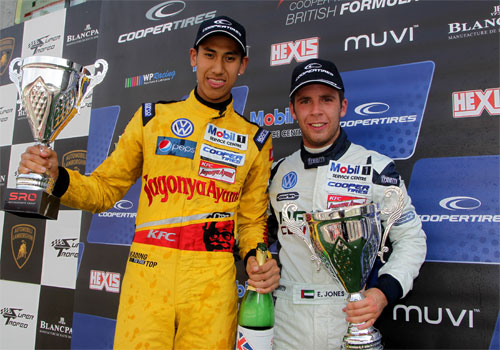 Ed Jones has made a remarkable recovery from injury to take three fantastic race wins at Spa-Francorchamps. The UAE based racer has been unable to race in recent weeks following an injury he sustained at Pau however he was back in action this weekend taking part in the Cooper Tires British Formula Three Championship. Making an impression in the Invitation class early on, he clinched pole position on Friday morning and enjoyed three fantastic starts off the line to take three brilliant wins on his return over the course of Friday and Saturday.

Jones has been unable to race with Carlin in his regular FIA Formula Three European Championship recently after an injury which he sustained while racing at the historic Pau circuit. Having taken a break recently he made his return to racing this weekend at Spa-Francorchamps alongside his regular team mate Sean Gelael in the Invitation class.

On Thursday it was apparent that Jones was putting his injury well behind him as he was clearly the man to beat. Jones continued to take this strong showing with him through in to qualifying on Friday morning. It was a relatively easy affair for the Carlin driver who ensured he put his car on pole position when it mattered for two out of the three races of the weekend. The first race got underway in dry conditions with Jones launching perfectly off the line and holding the lead throughout the race. This lights to flag victory marked the first of what was to be a successful weekend for the Formula Three racer.

In the afternoon the top five positions were reversed for the second race giving Jones the opportunity to race from the mid-field. Starting in fifth he enjoyed another strong start in which he charged off the line and through the pack to quickly clinch the lead as his own. The weather played a small part for Jones, who along with the rest of the grid was running on slick tyres, when rain started to fall at the first corner. This added a new dimension to contend with – which he handled brilliantly to take his second win of the weekend.

Saturday morning provided the final race of the event for Jones and once again saw him line up on pole position. This race was to be more dramatic for him as he lost position early on to team mate Gelael; Jones made sure to keep on his tail in an effort to reclaim his position. Wheel to wheel action then ensued with the lead changing several times – in the end Jones was to come out on top and secure his third dominant race victory of the weekend.

Speaking of his weekend Jones said, ‘Yesterday was good for us to take pole position and win two races; the car felt great and they were good fun races. There was rain in the second race which gave us something else to deal with but that’s just typical Spa and you come to expect it here. But I made the most of it so that’s great.

‘Then on Saturday we had the final race – Sean [Gelael] did manage to take the position from me after Eau Rouge however I could get it back a few laps later. So I’m very pleased with what was a really perfect weekend for me. I would like to thank everyone who has helped me recover from my injury and now I can’t wait for the rest of the season.’