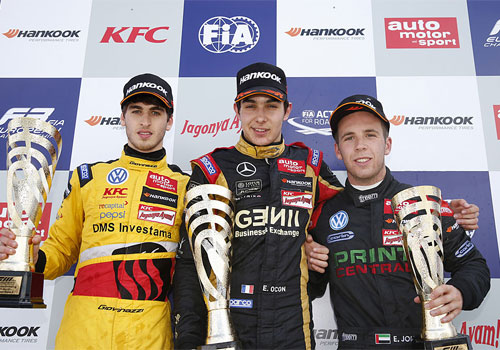 Ed Jones graced the FIA Formula Three European Championship podium twice this weekend following some fantastic and assured driving to collect a second and a third position in Hockenheim, Germany. The Carlin driver, embarking on only his first season in the FIA Formula Three European Championship, had a lightening start during race one where he started from third on the grid to snatch second position. Driving well Jones held his nerve despite a safety car period and pressure from drivers behind to clinch his first podium finish in the series. Jones continued his fine driving on Sunday to secure his second podium position of the season.

After a strong qualifying session on Friday, 2013 European F3 Open Champion Jones lined up third on the grid ahead of the opening race of the weekend. As the lights extinguished Jones reacted in the fastest way possible and was able to pass Antonio Giovinazzi for second position – and a provisional step on the podium.

By the end of the 14th lap the UAE based driver came under a little bit of pressure from Esteban Ocon in the Prema Powerteam car but remained where he was. After a mistake-free, calm and focused race Jones came home to take the chequered flag in second. This fantastic result meant that he has now graced the podium in his debut season in the championship.

Reflecting on his result Jones said, ‘It’s been a very strong weekend for us so far here in Germany; we could tell yesterday that the pace was there after our good qualifying and once again the team made sure I had the car under me to race with.’

Jones’ Fantastic weekend continued on Sunday as he collected his second piece of silverware from the weekend. Once again, getting a fantastic start and holding his nerve during a late safety car period he once again took a strong podium placed finish – coming home in third overall.

Jones said of his second race of the weekend, ‘What another great race! We knew we were fast and to get the second podium to prove it is such a good feeling for me. I’m very pleased for the team as well. We got a little close in the first corner however the restart went really well and it was quite a straightforward race for us. I’d like to work on the race pace with the aim being to challenge for wins as my next goal.’

Sadly Jones’ fantastic run in the points and on the podium was to come to an end during the third and final race when, while running in seventh position, he was penalised and handed a drive through penalty for running wide at turn one. However Jones still leaves the weekend with two pieces of silverware under his belt and a solid foundation as he prepares for the third round of the championship which will take place next weekend in Pau, France.