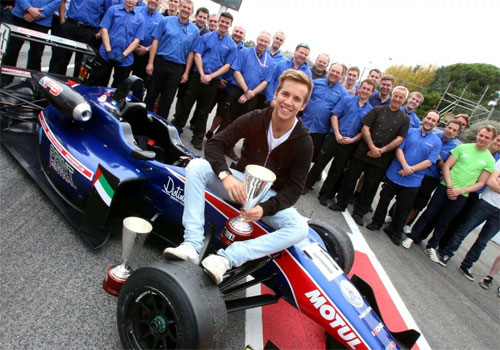 Finally Ed Jones and Team West-Tec have won the European F3 Open in 2013 at Circuit de Barcelona-Catalunya. Despite Jones missing the opening round at Paul Ricard, the UAE´s driver has completed a season without remarkable mistakes and was crowned as new European F3 Open champion joining other champions in the roll of honour like Niccolò Schirò, Alex Fontana, Marco Barba or Bruno Méndez.

In the morning, things were looking quite simple for Jones, as he took today's pole position once again. Anyway pressure was not far away, taking into account his main rival Sandy Stuvik (RP Motorsport) was second on the grid. Jones start was superb, pulling away quickly. Right behind Alexandre Cougnaud (RP Motorsport) showing his real skills at the start, overtook his teammate Stuvik for second. Jones, setting a couple of fastest laps, seemed too fast for anyone else on track, despite Cougnaud began to equal his pace before long. Even Santiago Urrutia (RP Motorsport) was putting pressure on Stuvik. But, with eight laps to go, Cougnaud caught Jones, passing him a few seconds after. By then Jones was struggling with tires and five laps later the favorite was overtaken by Stuvik, Urrutia and Nelson Mason (Team West-Tec). Cougnaud was victorious after seventeen laps, and Stuvik was second but it was not good enough due to Jones was fifth behind Urrutia and Mason, third and fourth respectively. In this situation honors went to Middle East.