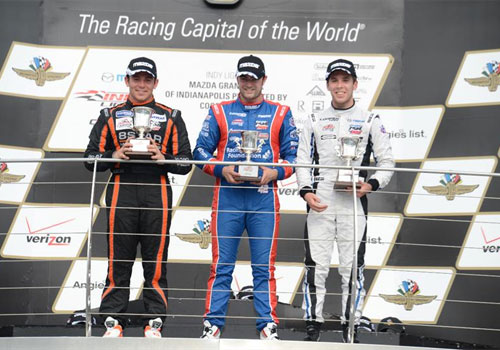 INDIANAPOLIS, IN  - Ed Jones reclaimed the championship lead at the weekend after finishing third in Race 1 and fourth in Race 2 at the Mazda Grand Prix of Indianapolis on the road course at Indianapolis Motor Speedway.

Jones qualified second for Race 1 on Friday and secured pole for Saturday’s race. After an aborted start, the race went green. As they braked for Turn One, fifth-place qualifier RC Enerson flew past on the outside, sliding wide into the grass and Jones, who did well to stay on track, got passed by third place Sean Rayhall. The 20-year-old continued to push hard and put pressure on Rayhall, but discovering he had no push-to-pass, made it extremely difficult to overtake. Jones, however still managed to earn a podium finish and pick up 22 points to regain the championship lead by one point.

Starting on pole in Race 2 for Carlin Racing, the No. 11 Toys for Boys Miami/United Rivers car was tapped by Jack Harvey at the start of the race and sent spinning. Jones was able to keep the car going but was now at the back of the field. However, the championship leader was determined to not let this ruin his race. Jones gradually made his way back through the field, but with laps becoming fewer he was just short of claiming another podium and finished fourth.

Commenting on the races, Jones said: “Unfortunately this weekend we have had two results really compromised by factors out of our control. Therefore we still have to take the positive that we have come out leading the championship with the potential to win many more races.”

With the podium finish Friday and then fourth on Saturday, Jones earned a total of 41 points and is back at the top of the championship standings with 166 points.

Next up for the Indy Lights Presented by Cooper Tires series is the Freedom 100 at Indianapolis Motor Speedway on May 22nd.  Qualifying will be at 1:15 pm ET on May 21st. Live timing and commentary for all sessions will be available on the Mazda Road to Indy app and at indylights.com.