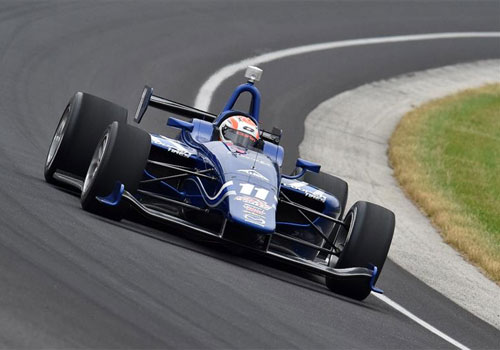 INDIANAPOLIS, IN – May 20, 2015 – Ed Jones, current Indy Lights championship leader will make his oval debut on Friday when he races at the legendary Indianapolis Motor Speedway in the Freedom 100 Presented by Allied Building Products.

Up until this year, Jones had spent his racing career on road and street circuits. He had his first taste of an oval in January, when he drove his No. 11 Toys for Boys Miami/United Rivers car at the first official Indy Lights Presented by Cooper Tires test at Homestead Miami Speedway.

The 20-year-old rookie reclaimed his championship lead two weeks ago at the double-header at Barber Motorsports Park.  He goes into the Freedom 100 with a six-point lead over Jack Harvey.

“It has been amazing to finally get to drive on the Indianapolis Motor Speedway”, said Jones. “Getting on track is very different to what I have experienced before. On Monday I just tried to learn as much as possible and worked on the car with my engineer. I feel really confident going into the race weekend that we can be right up the front.”

The UAE resident has already made a huge impact in his first Indy Lights season. Jones dominated the season-opener in St. Petersburg, winning both races from pole, setting a new qualifying lap record and finishing the second race over nine seconds ahead of second place Jack Harvey. He went on to earn a third victory in as many races at Long Beach two weeks later. At the Grand Prix of Indianapolis a few weeks ago, Jones once again found the podium, with a third place finish in Race 1.

Qualifying for the Freedom 100 will be at 1:15 p.m. ET on Thursday, May 21. The green flag is scheduled to fly at 12:30 p.m. on Friday, May 22. The race will be broadcast live on NBCSN.
There will also be live timing and commentary for all sessions on the new Mazda Road to Indy App and at indylights.com with live streaming on racecontrol.indycar.com.