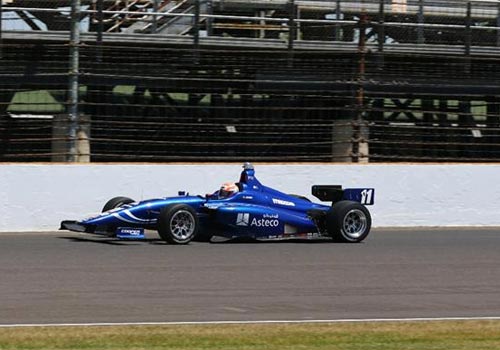 INDIANAPOLIS, IN – May 23, 2015 – Ed Jones made his oval debut at the legendary Indianapolis Motor Speedway yesterday in the Indy Lights Presented by Cooper Tires Freedom 100, finishing 10th.

Jones, who up until this week had only raced on road and street courses, had his first experience of an oval at the first official test back in January. Driving the No. 11 Toys for Boys Miami/United Rivers, Jones posted a four lap-average of 195.598 mph and qualified eighth.

The 40-lap race on the 2.5 mile super speedway started well and despite it being his first oval, Jones felt comfortable and was able to move up a few places, running as high as sixth.  Unfortunately with four laps remaining, Jones hit the wall hard after his right rear tire went down and out of the race, finishing 10th.

“Another tough weekend for us, “ said the 20-year old. “I ran pretty well in the race moving up to 6th, however I started feeling a vibration in the car on about lap 23. This vibration continuously got worse until the car started to do uncharacteristic things. I radioed in to the team but we decided try to stay out. I kept it flat but unfortunately the tire let go with 4 laps to go sending me into a spin eventually into the wall. After three weekends where we have had our races really compromised by things out of out control I hope we can fight back to where we belong in Toronto.”

Jones picked up 11 points and now sits seconds in the championship standings with 179 points, 13 away from first.

Next up for Jones and Carlin Racing is the double header on the streets of downtown Toronto, Ontario, June 12-14.