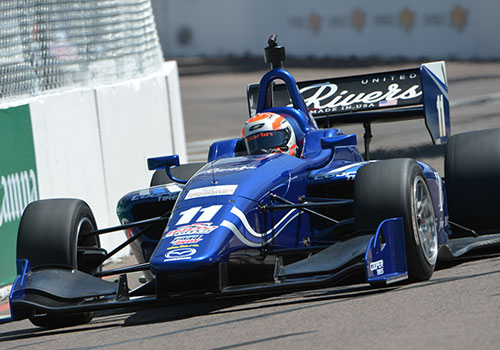 After steering his burgeoning career stateside this year, Jones belied his rookie status by sensationally storming to a double pole position and brace of victories on his Indy Lights bow around the Streets of St. Petersburg back in March.

Competing for single-seater powerhouse Carlin, the 20-year-old Brit subsequently proved that his outstanding debut had been no flash in the pan by following it up with another triumph at Long Beach three weeks later. Further podium finishes in the Grand Prix of Indianapolis and last time out in Toronto mean Jones is firmly embroiled in a fierce three-way tussle for the title with six races left to run – beginning at the Milwaukee Mile this weekend (11/12 July).

As he bids to turn the tables on his two chief championship rivals and reclaim his early-season ascendancy, the Dubai, UAE-based ace – a British Racing Drivers’ Club (BRDC) Rising Star and former European F3 Open Champion – has added his name to WH Sports Group’s growing roster of young talent and is palpably excited about the opportunities that lay ahead.

“I’m delighted to be teaming up with WH Sports Group,” enthused Jones, who set the pace in the most recent Indy Lights test session at a rain-soaked Mid-Ohio Sports Car Course. “I can learn and benefit a great deal from the wealth of knowledge and expertise here – you only need to look at the calibre of the other drivers on-board to see that they truly mean business!

“We share the same ethos, ambition and determination to succeed, and I’m confident WH Sports Group will help me to progress my career both this season and beyond.”

“We’re thrilled to have recruited Ed as our latest protégé and forecast great things for his future,” echoed WH Sports Group Director Chris Harfield. “He is unquestionably one of the hottest properties on the US open-wheel scene right now, and what he has accomplished to-date – finishing on the podium in half of his races and winning three of them – is quite simply extraordinary.

“Ed has very clear goals and our task will be to help him achieve them, by emulating the success of fellow WH Sports Group member Jack Hawksworth and climbing right the way to the pinnacle of the Mazda Road to Indy ladder in the Verizon IndyCar Series. We look forward to working together.”