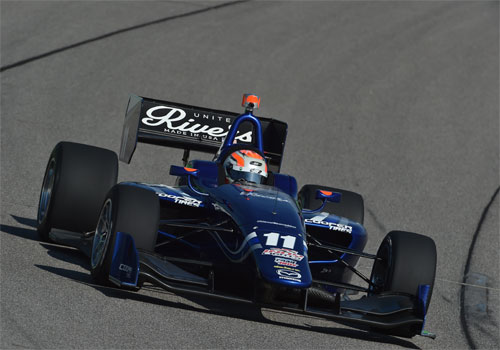 Ed Jones slashed the deficit to his two title rivals in the fiercely-contested 2015 Indy Lights campaign at Iowa Speedway, belying his lack of oval racing experience and rookie status to snare a superb second place and home in on the championship lead.

Having steered his burgeoning open-wheel career stateside this year, Jones has firmly established himself as an Indy Lights front-runner, and the 20-year-old Brit travelled to the 0.875-mile Mid-West oval sitting third in the chase for the coveted crown.

After enjoying plenty of track time during testing – lapping less than a quarter-of-a-second off the pace – Jones maintained his strong form during practice before upping the ante in qualifying to secure a front row grid slot in his Dallara IL-15 single-seater, a scant six hundredths adrift of the outright benchmark in an incredibly closely-matched field.

A solid start to the Iowa Corn Indy 100 saw the Dubai, UAE-based ace settle into second position, right in the wheeltracks of Carlin team-mate Max Chilton. Having shadowed the ex-Formula 1 driver throughout the race’s opening half, Jones boldly snatched the top spot at mid-distance as lapped traffic disrupted the flow.

The intervention of backmarkers – a real issue around such a short lap – allowed the pursuing pack to latch onto the rear of the pace-setting Carlin duo, transforming a healthy advantage into a nose-to-tail five-way scrap for supremacy in barely the blink of an eye.

After 13 laps in front, Jones conceded the lead to Chilton once more, and with a tyre vibration subsequently affecting the handling of his car, the Williams-Harfield Sports Group protégé had little choice but to ease off the gas and focus on preserving his position.

Maturely managing the situation whilst continuing to pull away from his adversaries behind, the runner-up spoils saw Jones significantly out-score his chief championship competitors – even lapping one of them along the way – and in evidence of his scintillating raw pace, he set fastest lap into the bargain.

That enabled the British Racing Drivers’ Club (BRDC) Rising Star and former European F3 Open Champion to reduce his gap to the top of the title table from 29 points to just 20 with four races remaining, beginning at Mid-Ohio Sports Car Course in a fortnight’s time.

“Iowa is a very different oval from the others we have raced at,” he reflected. “Steep banking creates a unique challenge along with some big bumps, which unsettle the car. Throughout testing, we worked hard on every aspect to ensure we had a good package for both qualifying and the race.

“In qualifying, I made a big step in myself but we went a bit too conservative on the downforce level, which cost me pole. We could probably have got away with running a little less wing, but it was great for the team to lock out the front row.

“In the race, I felt really comfortable and was able to look after my tyres while staying behind Max. Once the backmarkers came into play, I took advantage and stole the lead. I thought maybe I had a chance at the win for a few laps, but unfortunately, I lost the lead again when Max understeered on the inside, which meant I had to lift to avoid hitting the wall.

“We were still in a good position, but 25 laps from the end I picked up a vibration in the car from a tyre – very similar to what had happened at Indianapolis. As a result, the team decided it was best for me to back off and consolidate second place.

“Obviously that was frustrating, but I was still very pleased overall. To come here and do what we did was a big team effort – I think it shows how much we have improved – and it gives us more confidence on ovals going forward. It's great to be back at the front and have the momentum on our side heading into the last two weekends.”