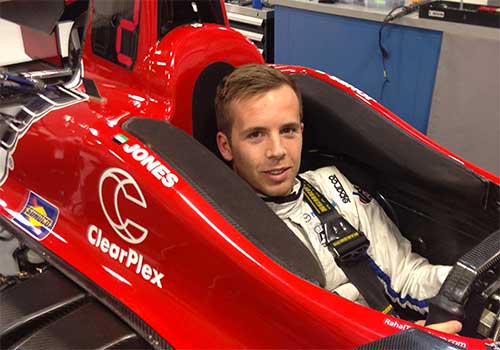 Indy Lights title protagonist Ed Jones will make his Verizon IndyCar Series test debut with Rahal Letterman Lanigan Racing at Sonoma Raceway next week – and the 20-year-old Brit has vowed to ‘grab the opportunity with both hands’.

Having steered his burgeoning open-wheel career stateside this year, Jones has taken Indy Lights by storm, tallying a hat-trick of race victories straight off the bat with Carlin and heading into the season finale at Laguna Seca in September as one of the foremost contenders in the chase for the coveted crown.

The Dubai, UAE-based ace has been both a consistent front-runner and fast learner during a superb rookie campaign in the fiercely-disputed single-seater series – as evinced most markedly by his eye-catching progress on ovals. His potential has palpably been noted by Rahal Letterman Lanigan Racing, whose driver Graham Rahal strengthened his IndyCar championship credentials off the back of a second triumph of 2015 at Mid-Ohio last weekend.

Jones will climb into the cockpit of the Indiana-based outfit’s 600bhp Honda-powered Dallara at the 2.2-mile Sonoma road course on Thursday, 13 August – and the British Racing Drivers’ Club (BRDC) Rising Star and former European F3 Open Champion is determined to stake his claim to a successful future amongst the Mazda Road to Indy elite.

“I’m really looking forward to the opportunity and can't thank Rahal Letterman Lanigan Racing enough for giving me this chance to show what I am capable of,” he enthused. “One of my childhood dreams was to at least drive a racecar at the pinnacle of the sport, and I am now well on my way to doing that, which is amazing.

“Of course, when an opportunity like this comes up you have to grab it with both hands and I am working extremely hard to prepare myself for the test. The car is going to be quite a step-up from Indy Lights, however in the past I haven't had a problem moving into higher categories. My main aim is to give the team as much feedback as I can and learn as much as possible in the available time.”

"Ed's pedigree from Europe is quite good and of course he won the first three races in Indy Lights, so obviously he is a young, talented driver,” reflected Rahal Letterman Lanigan Racing co-owner, three-time IndyCar Champion and 1986 Indianapolis 500 winner Bobby Rahal. “He still has a lot to learn yet, but we thought he would be a good guy to test.

“When we met, we were impressed with Ed as a driver and a person and while we aren't looking for him to set a new track record, we feel he can provide value and help develop Graham's car. We're looking forward to working with him at Sonoma."

Ahead of the test, Jones also received a vote of confidence from his current team principal Trevor Carlin, who tipped the Williams-Harfield Sports Group protégé to turn heads when he takes to the track in California.

“We’re very pleased that Ed’s performance this year has brought him to the attention of a top-line IndyCar team,” he affirmed. “We have no doubt that he will conduct himself well at the test and we’re very proud that another one of our drivers has been recognised at the highest level.”