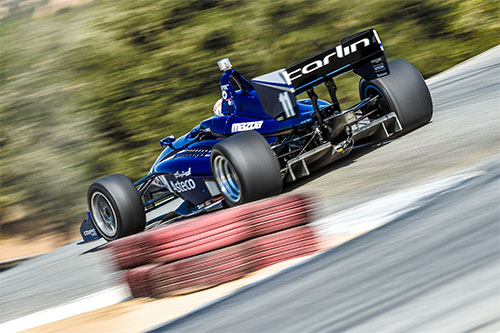 Ed Jones had every justification to be proud of his performance as the fiercely-disputed 2015 Indy Lights season drew to a close with a double-header finale at Mazda Raceway Laguna Seca, after the talented US racing rookie put up a spirited fight en route to third spot in the championship standings.

Having stunned observers with his pace and racecraft during his maiden campaign stateside, Jones arrived at Laguna Seca – a challenging 2.238-mile, 11-turn road course in scenic Monterey, California – as a bona fide title protagonist with three prior victories, three pole positions, three fastest laps and six podium finishes to his credit.

The 20-year-old Brit entered the high-stakes weekend sitting 18 points adrift of the top of the table and put a lot of laps on the board throughout testing as he placed fourth in both sessions. Jones improved to second-quickest in free practice – a scant 17 hundredths-of-a-second shy of the outright benchmark behind the wheel of his Carlin-prepared single-seater – and subsequently headed into qualifying in optimistic mood.

Unfortunately, traffic on what should have been his best run restricted the Dubai, UAE-based ace to fourth on the starting grid – sandwiched directly in-between his two principal rivals – but he advanced to third early on in the opening encounter when the leader hit a tyre stack. Thereafter, the front-running quartet – blanketed by less than three seconds and lapping at very similar speed – eased clear of the chasing pack, with Jones finding himself needing to attack and defend all at once.

Despite having his mirrors full of Sean Rayhall, the British Racing Drivers’ Club (BRDC) Rising Star and former European F3 Open Champion withstood unrelenting pressure for the duration and very nearly snatched the runner-up spoils right at the end when the driver ahead made a mistake.

From fifth on the grid the next day, Jones settled into the same position in the race and after shadowing Shelby Blackstock throughout, his determination and perseverance paid dividends as he forced his way past into fourth on the very last lap.

A valiant effort when the odds were always stacked against him, the result secured the Williams-Harfield Sports Group protégé third in the final classification, with no fewer than seven different winners from 16 outings serving to underline just how competitive the 2015 field has been.

Not only that, but with more than 100 drivers having previously graduated from Indy lights to the pinnacle of the Mazda Road to Indy ladder – recently-crowned Verizon IndyCar Series Champion Scott Dixon amongst them – Jones’ future would appear to be in safe hands.

“Going into the weekend, I didn’t have much pressure on me – I was more the dark horse given the points situation,” he mused. “I really enjoyed driving Laguna Seca – it’s a fantastic circuit with so much history to it, and I can still remember playing my first racing games there.

“In qualifying, it was all looking good until my last set of tyres when we had a bad run with traffic which cost us pole position. From there, in race one we had the pace of the leader but passing was so difficult, which generated a bit of a procession. Race two was a similar story after the start, but I kept the pressure on Blackstock and was able to make a lunge on the last lap which paid off.

“Reflecting on the season as a whole, there have been a number of occasions where things just haven’t gone our way for whatever reason, but I’m pleased with what I’ve achieved. Being a rookie in America, people weren’t sure what to expect of me initially but I knew I would be at the front and whilst it’s obviously disappointing not to ultimately win, I’ve made my mark and I’m already excited about making plans for next year.

“Finally, I have to thank Carlin for the amazing work they have done this year to give me a shot at the title right the way through to the last race – and congratulations to Juncos Racing for doing such a great job to win the championship.”