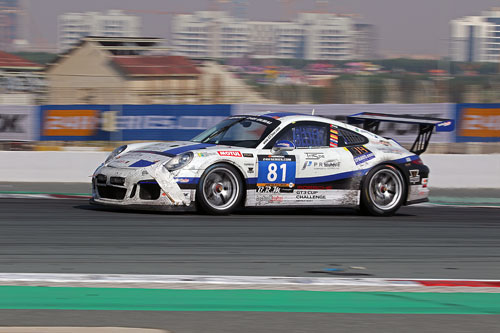 Ed Jones showcased his pace, panache and versatility with a starring performance on his endurance racing debut last weekend – as the 20-year-old Brit sped to the runner-up spoils in the 24H Dubai.

More accustomed to open-wheel competition and currently gearing up towards a title bid in his sophomore season in America’s fiercely-disputed Indy Lights championship – after placing an outstanding third overall as a rookie in 2015 – Jones clinched an 11th-hour deal to contest the 24H Dubai with Lechner Racing Middle East.

Teaming up with Hannes Waimer, Wolfgang Triller, Charlie Frijns and Christopher Zöchling in the round-the-clock classic – the 2016 FIA International 24H Series curtain-raiser – the talented Dubai, UAE-based ace had to rapidly get to grips with Lechner’s Porsche 991 GT3 Cup racecar, an altogether different proposition to the Carlin single-seater he regularly campaigns in the United States.

In evidence of his ambition, Williams-Harfield Sports Group protégé Jones immediately had a strong result in his sights despite his lack of prior sportscar experience, but the #81 entry had to overcome a number of obstacles throughout practice that left its driving crew somewhat on the back foot heading into qualifying. In the circumstances, fifth on the grid amongst the 18 high-calibre 991 category contenders was a triumph in itself.

Thereafter, the quintet enjoyed a near flawless run during the race to take the chequered flag second in-class behind the sister #80 car and an admirable 12th outright, completing a popular one-two finish for Lechner Racing Middle East on home turf.

To put that achievement into perspective, the 991 field also included the likes of former Le Mans Series Champion and Nürburgring 24 Hours winner Alexandre Prémat, erstwhile IndyCar Series ace Alex Tagliani and reigning Porsche Carrera Cup GB king Dan Cammish, not to mention a whole host of other endurance racing experts. As he reflected upon a ‘fairytale’ outcome, Jones was quick to pay tribute to a superb team effort.

“It was a real last-minute agreement, and going into the weekend, everything was brand new to me,” acknowledged the British Racing Drivers’ Club (BRDC) Rising Star and ex-European F3 Open Champion. “My first objective was to learn and adapt to the car and style of racing as quickly as I could. I only got about 15 laps under my belt before my first stint in the race, which happened to be at night – so I was certainly thrown in at the deep end in that respect!

“The Porsche was obviously totally different to what I’m used to; for starters, it has ABS brakes, and the weight transfer means it is a lot more pitch-sensitive than a single-seater but I made massive strides forward every time I took to the track and I have to thank my team-mates for helping me to get up-to-speed as swiftly as possible – Hannes, Wolfgang, Charlie and Christopher were all extremely supportive and taught me a lot in a comparatively short period. In my final stint, I was consistently the quickest in-class, so I was pleased with my performance.

“Taking part in the 24H Dubai gave me a genuine appreciation for the challenges of endurance racing and the discipline required to compete at the top, from making sure all the driver changes are slick to dealing with traffic – with 100 cars on the track, it was a question of being ruthless whilst at the same time not taking any unnecessary risks. You need to know when to be aggressive and when to back off. Coming from single-seaters, the speed differential between the various classes was also an eye-opener; you have to stay constantly alert, because it’s so easy to misread closing distances.

“To come away with the result we did was amazing – having never driven that kind of car before, it was a real fairytale ending. The team was absolutely faultless throughout; we had an excellent strategy, my team-mates did a great job, everything ran smoothly and we didn’t encounter any mechanical issues in the race. It was an almost perfect run, which is difficult to pull off in sprint racing, never mind over the course of 24 hours!

“Had just a few small things gone more our way, we might even have fought for victory, but to take a one-two for Lechner Racing Middle East was fantastic and testament to how well everybody had prepared for the event – that level of professionalism instilled us with confidence as drivers to go out there and really push on.

“I need to thank the team for giving me the opportunity and I gained a lot of experience along the way, so whilst I remain fully committed to following the open-wheel path and my upcoming Indy Lights campaign, you never know what doors this may open further down the line...”