Jones vows to fight back after luckless Indy Lights opener 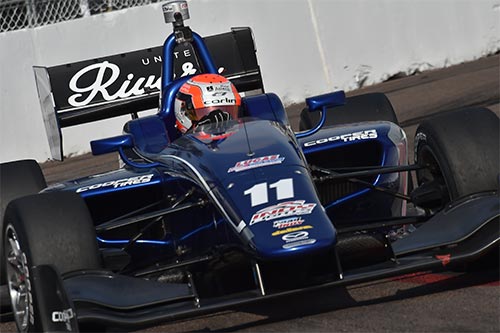 Ed Jones is focussing on the positives following a luckless opening weekend to his 2016 Indy Lights campaign in St. Petersburg, drawing encouragement from his speed and fighting spirit in the face of persistent adversity.

Jones entered the curtain-raising Streets of St. Petersburg double-header off the back of a productive winter testing programme and having dominated around the Florida circuit 12 months earlier, claiming a show-stopping clean sweep of pole positions and victories on his US racing debut.

Whilst recognising that it would be a tall order to repeat that impressive feat given the intensified calibre of competition this year, the 21-year-old Brit was nonetheless in bullish spirits and justified his confidence by featuring up towards the sharp end throughout free practice behind the wheel of his 450bhp Carlin single-seater.

An ill-timed session stoppage in qualifying, however, left him an unrepresentative 12th on the starting grid for race one, and to compound matters, a tardy getaway by a driver ahead when the lights went out relegated Jones to 15th. Some incisive racecraft borne out of a season’s Indy Lights experience enabled the talented Dubai, UAE-based ace to battle back up the order, but downshifting gremlins restricted him to a disappointed tenth place at the chequered flag.

In the following day’s outing, Jones navigated his way artfully around an opening lap mêlée to swiftly advance to seventh. He was continuing to make progress and sizing up a move for fifth position when his overtaking attempt was foiled by lapped traffic, sending the former European F3 Open Champion into a spin and dropping him to seventh, where he would thereafter remain.

That leaves Jones sitting tenth in the standings in the fiercely-disputed Mazda Road to Indy series heading next to Phoenix International Raceway at the beginning of April – albeit just 24 points adrift of the top of the table. He promises to waste little time in climbing back onto the podium and belatedly kick-starting his title bid.

“I love St. Pete,” acknowledged the Williams-Harfield Sports Group protégé. “It’s one of my favourite circuits on the calendar and whilst we knew it was always going to be tough to reproduce last year’s performance in light of the enhanced strength-in-depth of the Indy Lights field in 2016, we certainly expected to be in the mix for victory again.

“Unfortunately, we got caught out in qualifying. I was on a flying lap on a new set of tyres and my projected time would have put me on the front row of the grid, but then the red flags came out, which scuppered our efforts. Around a track like St. Pete, it’s difficult to recover from that kind of setback due to the shortage of passing opportunities – starting position really is key. Without that issue, the whole weekend could have panned out very differently.

“At the beginning of race one, the driver in second on the grid was slow away, which delayed everybody directly behind and meant we were immediately playing catch-up. To add insult to injury, we subsequently developed downshifting problems, requiring me to brake earlier than usual and coast into corners and costing us a lot of time.

“In race two, I needed to be forceful to get moves made, but when I tried to take fifth place, a backmarker inadvertently got in the way. We went three-wide into Turn One and I was squeezed onto the dusty part of the track; when I hit the brakes, I clipped the airport runway paint and it spun me round.

“That was obviously frustrating, but we proved we’ve got the pace to challenge at the front, and once things had settled down in the races, I was the only driver really doing any overtaking. There were definitely positives to take away from the weekend and we at least put two solid points finishes on the board, which not everybody could say.

“Ultimately, we pushed as hard as we could and made the best out of a bad situation – and as long as we maintain that same approach, the results will come. There’s still a very long way to go in this championship and a lot of points to play for, so all is far from lost. Besides, last year we won both races in St. Pete but didn’t win the title, so maybe having a tough weekend this time is a good omen!”