Jones rises to the challenge with timely Phoenix podium 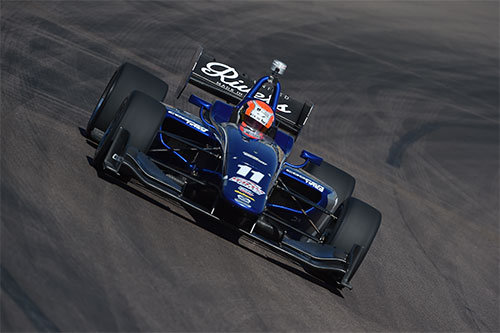 Ed Jones has kick-started his 2016 Indy Lights title bid by speeding to the runner-up spoils around the ultra-fast Phoenix International Raceway, flashing past the chequered flag barely a second shy of victory following a resolute pursuit.

Heading into the weekend in optimistic mood, Jones was determined to bounce back from a troubled St. Petersburg curtain-raiser three weeks earlier. In evidence of that, he was quick out-of-the-blocks behind the wheel of his 450bhp single-seater as he confidently led the Carlin charge.

Lapping right up at the sharp end during free practice, the 21-year-old Brit also survived a sizeable sideways ‘moment’ that obliged him to draw upon all of his car control to avert a hefty impact with the unforgiving wall. Undeterred, Jones went on to qualify a close second at an eye-watering average speed of 167.5mph, thereby earning himself a front row start for the race.

Maintaining the same position when the action got underway, the talented Dubai, UAE-based ace kept the leader honest throughout. Rarely more than a second adrift, Jones’ sustained pressure saw him narrow the gap slightly after the midway stage, but with overtaking opportunities at a premium, there was no way past.

Nevertheless, second place represented a significant points haul and enabled the former European F3 Open Champion to claw his way back into contention for the coveted crown, vaulting from tenth up to fourth in the standings amongst the 17 high-calibre protagonists in the fiercely-disputed Mazda Road to Indy series. The next outing will take place on 22-24 April at Barber Motorsports Park in Alabama, where Jones was on fine form during testing last month.

“Phoenix was a really positive weekend,” the Williams-Harfield Sports Group protégé enthused. “We rolled out with a pretty strong package straight off the bat, and then worked hard to refine it. We managed to put everything together in qualifying and extracted the maximum out of the car, but the circuit had evolved more than we had expected and in hindsight, perhaps we went a touch too conservative on the set-up.

“That was actually the biggest challenge at Phoenix – the changing track conditions as the IndyCar rubber went down and the temperature rose and fell. Every time we went out, it was a case of having to adapt the car and my driving style to suit the situation because it was always different. Staying on top of that was key.

“It’s a short oval with not much banking, and it’s easy to make a mistake – 90 laps of constantly turning left in the race was both mentally and physically draining, and it was a fairly processional affair, in truth. Once everything settled down, the leader essentially dictated the pace.

“Overtaking was virtually impossible; even though I was in the slipstream of the driver ahead, every time I got close enough to think about attacking, the aerodynamic effect upset the balance of the car – running in clean air was such a big advantage.

“We were hoping we might get a chance in lapped traffic, but due to the caution period, the backmarkers never came into play. Tyre preservation didn’t transpire to be as important as we’d anticipated, either; I looked after mine in the early stages expecting them to fade later on, but they held on really well.

“Still, second place was an excellent result and gets our season back on-track – it was a timely tonic after a difficult weekend in St. Petersburg. Now we need to take this momentum forward with us and run with it.”