Jones races into championship lead with first victory of 2016 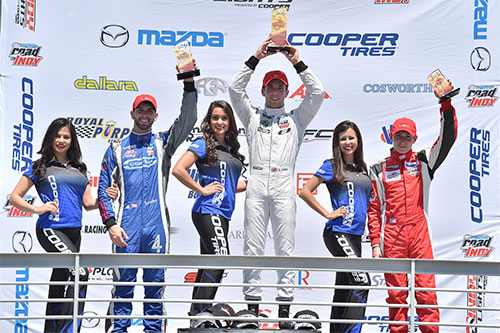 Ed Jones blasted his way into title contention as the 2016 Indy Lights campaign sped into Barber Motorsports Park for the Legacy 100 last weekend, with a commanding triumph vaulting the talented young Dubai, UAE-based ace to the top of the championship standings.

Jones travelled to the scenic Alabama road course in determined mood, fully focussed on fighting back from a mixed start to his sophomore season in the fiercely-disputed Mazda Road to Indy series. Buoyed by a new partnership with BLOC Eyewear, the 21-year-old Brit topped the timesheets during free practice amongst the 16 high-calibre contenders.

Behind the wheel of his 450bhp Carlin-prepared single-seater, Jones proceeded to annex a double pole position in qualifying – extending his Indy Lights total to five – and in the opening encounter, a textbook getaway when the green flag dropped saw him establish an early margin over his pursuers.

Although that advantage was soon nullified by a full-course yellow for an accident further down the order, the former European F3 Open Champion rapidly reasserted his supremacy when the action resumed. Artfully withstanding late-race pressure from team-mate Félix Serrallés, Jones controlled the pace consummately – and his reward was his first victory of the year and the fourth of his Indy Lights career.

The Williams-Harfield Sports Group protégé looked set to double up the following day, but an overnight change in temperature and wind direction left him grappling for grip somewhat, and he sagely conceded to a do-or-die challenge from a charging Santiago Urrutia. Thereafter, he concentrated on consolidating second place, in the knowledge that it would be more than enough to earn him the championship lead.

“What a fantastic weekend for both myself and the team!” enthused Jones, whose third consecutive podium finish leapfrogged him five points clear at the top of the title table. “We knew how critical qualifying would be, given how tricky it has historically been to overtake around Barber. It’s a really demanding track with a lot of undulation and high loads through some of the corners and as expected, the session was extremely tight, but I exploited the peak tyre performance to nail two quick laps.

“I focussed on conserving my tyres to begin with in race one, because degradation was greater than anticipated. Félix put me under some pressure towards the end, but I knew that as long as I kept hitting my markers, I would be able to manage the gap and keep him behind me. It was a bit of a chess game in that respect – all about second-guessing his next move.

“We’ve been working so hard, and it had been so long since we’d last had a win – we’ve had the speed pretty much everywhere, but for whatever reason, the cards hadn’t fallen our way until Barber, so it was fantastic to be back on top again and awesome for the team to come away with a one-two. The Carlin boys did a brilliant job and the result was a real shot in the arm for them all.

“In race two, we never quite had the ultimate pace; with the change in conditions, it seemed like some of the other guys found the sweet spot better than we did and I was sliding around a bit. Urrutia made quite an ambitious move, which forced me to take avoiding action – I had already turned into the corner and had to swiftly turn out of it again, as he effectively gave me the choice between jumping out of his way or colliding!

“One significant lesson I learned in 2015 was that it is far more important to take the points than risk scoring nothing at all, so I let him go and turned my attentions towards defending second place. The level of competition is so high in Indy Lights this year – with five different winners from the first five races – that it will all come down to consistency in the final reckoning. On the days when you can’t win, you need to make sure you score as well as possible – and that’s what we did on Sunday.

“It was great to leave Barber with the points lead following our slow start to the season. It’s the Indianapolis Road Course up next and we were really strong there last year, so hopefully we can keep this form going...”