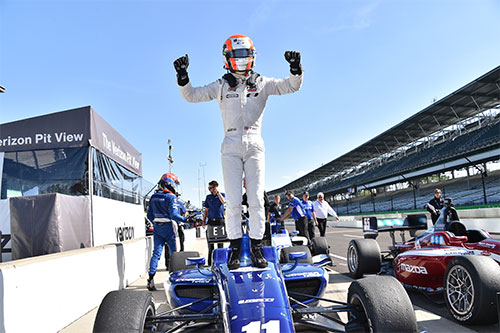 Ed Jones sped clear of his pursuers in the chase for the coveted Indy Lights crown at the Indianapolis Grand Prix Circuit last weekend, with a peerless performance yielding the second victory of his sophomore season in the fiercely-disputed Mazda Road to Indy series.

Having moved into the championship lead three weeks earlier at Barber Motorsports Park, Jones travelled to Indianapolis aiming to maintain his burgeoning momentum. Behind the wheel of his 450bhp Carlin single-seater, he duly featured inside the top three throughout testing and practice amongst the 16 high-calibre competitors.

The talented Dubai, UAE-based ace carried that form into qualifying as he commandingly clinched pole position for both races – making it four in swift succession in 2016 – with a stellar effort that was more than three tenths-of-a-second out of reach of any of his rivals, earning him a new lap record for good measure.

After making a textbook getaway in the opening encounter, Jones maturely controlled proceedings by holding a steady margin of just under a second over nearest challenger Dean Stoneman. His rhythm was interrupted by a late full-course yellow for contact further down the order, which bunched the field together. At the re-start, the 21-year-old Brit then found himself a sitting duck as two of his adversaries benefitted from the tow down the long main straight to draft past.

What followed was a dramatic sequence of corners, and as the two new leaders went wheel-to-wheel into Turn Seven, Jones read the situation impeccably, pulling off a stunningly opportunistic overtaking manoeuvre to undercut them both. Thereafter, he checked out to become Indy Lights’ first double winner of the campaign.

The former European F3 Open Champion produced another excellent start in race two the next day – gunning the throttle at precisely the right moment and protecting the inside line into Turn One – but a mistake on cold tyres subsequently saw him slip to seventh, more than eight seconds adrift of the lead. Grittily fighting back, he reduced that deficit to barely three seconds by the chequered flag, lapping consistently quickest on the track to salvage fourth position in the final reckoning.

Notwithstanding the disappointment of narrowly missing out on the podium, Jones’ results more than quadrupled his advantage at the top of the title standings from five points to 21, and next on his calendar, it’s the big one – the legendary Indianapolis Motor Speedway at the end of May.

“We felt positive going into the weekend because we’d been fast around the Indianapolis Grand Prix Circuit last year, and we were on the money again from the outset,” reflected the Williams-Harfield Sports Group protégé. “The team and I worked together really well to fine-tune and improve the car in every session, and the pace we had in qualifying was pretty incredible, to be honest.

“Despite the constant pressure, I had everything in-hand in race one and whilst I knew Stoneman was behind me, I was able to keep him at arm’s length. Then of course the safety car appeared, and it was always going to be tricky to defend at the re-start with such a long run down the pit straight and the slipstreaming opportunities that presents, and I guess everybody used their push-to-pass.

“To have done all that hard work and then be shuffled down to third so close to the end was tough, but I remained patient, because the key to this championship will be consistency and not taking unnecessary risks. When I saw my chance to reclaim the lead, I grabbed it and having grown up watching so many races at Indy, it was an amazing feeling to win at such an historic track.

“Conditions cooled significantly overnight, and some drivers spun on the warm-up lap ahead of the second race because of difficulty getting heat into the tyres. I made a good start and managed to establish a small gap, and I was pushing hard when I locked the front-left tyre at Turn Seven and went straight on. It was driver error and in hindsight, I should probably have taken it a touch easier at that early stage given the drop in temperature and restricted grip.

“The most frustrating aspect was that our pace was really strong again – we were clearly quick enough to win – but the mistake meant that from then on, it was all about damage limitation and to rescue fourth position in the circumstances was a solid result.

“It wasn’t quite the perfect weekend because it should have been two wins, but we take a lot of encouragement from it nonetheless and the Carlin boys did a fantastic job as ever – I really can’t thank them all enough. The Indianapolis Motor Speedway will certainly be a challenge, but it’s one that I’m relishing. I struggled there a little last year because it was my oval racing debut, so whilst I’ll go back with a bit of a point to prove, I’ll also return with a lot more confidence and experience under my belt. I think we’ll be in with a decent shout.”