Jones pipped to victory by narrowest of margins in Brickyard thriller 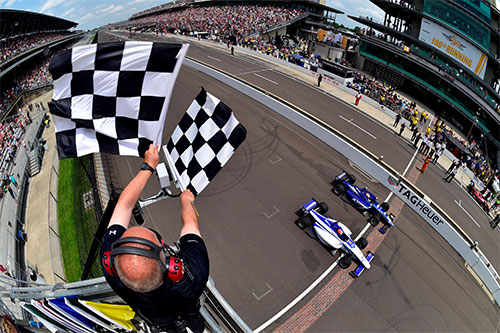 Ed Jones stretched his advantage in the chase for the coveted Indy Lights crown with a starring performance in the Freedom 100 at Indianapolis Motor Speedway (IMS) that saw him narrowly miss out on victory in the closest finish in the legendary circuit’s history.

Jones made his oval racing debut at Indianapolis in 2015, struggling for pace before a puncture precipitated a hefty impact with the unforgiving concrete wall. Twelve months on, the talented Dubai, UAE-based ace returned to the iconic Indiana racetrack with more experience under his belt and leading the way in the standings in his sophomore campaign in the fiercely-disputed Mazda Road to Indy series.

Indeed, in evidence of his impressive progression, last year’s oval racing rookie entered the event having qualified on the front row of the grid and finished runner-up in his most recent two oval outings. Inside the cockpit of his 450bhp Carlin Dallara IL-15 single-seater, he maintained that stellar form around the ultra-fast IMS as top speeds approached an eye-watering 200mph.

With qualifying being rained off, the field lined up for the 100-mile showdown in championship order, placing Jones on pole position amongst the 16 high-calibre contenders – for the fifth time in swift succession in 2016. In front of a capacity crowd at the celebrated Brickyard, the 21-year-old Brit held firm as the green flag dropped and thereafter settled into a flat-out slipstreaming draft-fest in a race punctuated by caution periods for accidents – one of them involving his nearest title challenger.

With the pack concertinaing together at each re-start, wheel-to-wheel action was guaranteed, and Jones engaged in a thrilling duel for supremacy with Andretti Autosport rival Dean Stoneman as the pair exchanged the top spot on multiple occasions.

Following the final safety car intervention, a one-lap shoot-out lay in wait, and from third position, the former European F3 Open Champion sensationally darted out wide to snatch the lead. Stoneman immediately fought back and, in a side-by-side drag race to the line, got the nod by the slenderest of margins of 0.024 seconds.

Despite the fleeting disappointment, his fifth podium finish from eight starts this season enabled the ultra-consistent Jones to pull further clear in the drivers’ standings – from 21 points to 29 – with the Grand Prix of Road America double-header next on the Indy Lights calendar in just under a month’s time.

“I was really looking forward to returning to Indy, because I knew how much I had improved on ovals since last season,” mused the Williams-Harfield Sports Group protégé. “It’s the biggest weekend of the year and obviously a very special event, but at the end of the day, it’s still worth the same points as any other race. That said, there was admittedly a moment when I took a step back and soaked up the incredible atmosphere, which put into perspective how far we’ve come and what we’ve achieved – and how close we now are to the ultimate goal.

“It was a shame to earn pole in the way we did, but of the eight cars that had run before the session was stopped, we were the quickest so I was confident we had the pace. I really enjoy oval qualifying – it’s a tremendous mental challenge. You trim the car out a bit more and then have to push flat-out as soon as you leave the pits, without knowing what to expect going into the first corner on cold tyres. That requires a bit of blind faith, which is an amazing rush.

“The race was really exciting – constantly back-and-forth, and very strategic. I spent a lot of time being patient and letting the laps tick down, and I was very careful to make sure I didn’t drop out of the top three, because that would have risked getting dragged into a dogfight further down the order – especially with the other two Andretti cars right behind me.

“I lost count of the number of times Dean and I passed each other, and I was more aggressive than usual, which seemed to pay off. When we re-started with one lap to go, I took the lead into Turn One and kept it flat the whole way round, but Dean benefitted from the slipstream to get a run on me through Turn Three and that gave him the extra momentum.

“It was a classic case of so near yet so far – it was such a tiny margin that it really could have gone either way. It was cool to be a part of the closest finish in IMS oval racing history, although massively frustrating to be on the wrong side of just 24 thousandths-of-a-second! The team gave me a great car and I was pleased with my performance – I couldn’t have done any more – but full credit to Dean. He drove a great race.

“Looking at the bigger picture, we were consistently up at the front once again, and that will prove very important as we get towards the business end of the season. We’ve left every race meeting recently having increased our championship lead, which has to be the main objective – so in that respect, Indy was very much mission accomplished.”