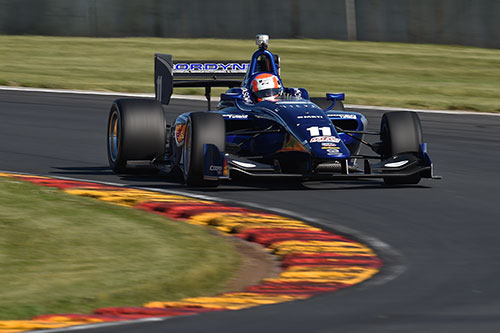 Ed Jones retained his advantage in the chase for the 2016 Indy Lights crown after a bruising weekend at Road America, where his pace and potential were far from reflected in the final results.

Despite never having previously competed around the picturesque and undulating Midwest road course, Jones was immediately in the ballpark as he lapped second-quickest in practice and qualified third for race one – a scant two hundredths-of-a-second adrift of the outright benchmark in the high-calibre field. What’s more, the 21-year-old Brit’s commendable consistency – very much a hallmark of his campaign to-date – comfortably secured him pole position for race two aboard his 450bhp Carlin Dallara IL-15.

In the opener, Jones gained ground at the start before engaging in an energetic place-swapping scrap with chief title rival Dean Stoneman, sweeping boldly around the outside into Turn One only to later concede the spot shortly before a full-course caution period to help clear up an incident further down the order.

When the action resumed, the talented Dubai, UAE-based ace attempted to wrest second position back but contact left him contending with a damaged front wing and enabled his team-mate Félix Serrallés to squeeze past. Thereafter, Jones spent the rest of the race clinging grittily onto fourth from the baying pack behind, earning valuable points for his earnest efforts.

A damp track surface greeted the field the following day, but the former European F3 Open Champion held firm at the green flag as he tiptoed around the 14-turn, four-mile lap. When his closest pursuer Zach Veach spun in his attempts to keep up, Jones was handed a healthy lead and he was consummately controlling proceedings and pulling away when a full-course caution on lap six undid all his hard work.

At the re-start, the Williams-Harfield Sports Group protégé came under instant attack from Stoneman, with another captivating wheel-to-wheel duel again culminating in contact. With both drivers momentarily delayed, Serrallés ran into the back of the #11 car in the ensuing mêlée and tipped Jones sideways into André Negrão, damaging his front and rear wings and forcing him to pit for repairs.

Upon rejoining, the only honour remaining to fight for was that of posting the race’s fastest lap, which the series sophomore missed out on by less than a tenth-of-a-second. After taking the chequered flag an appropriately unlucky 13th, Jones will next head to Iowa Speedway in mid-July for an altogether different kind of challenge – and eager to extend his 19-point championship lead in the fiercely-disputed Mazda Road to Indy series.

“Road America is one of my favourite circuits on the Indy Lights calendar, and we were quick from the outset,” he reflected. “It was a little frustrating not to continue our pole position streak in qualifying for such a tiny margin, but it was encouraging to be so consistent, which obviously paid off on the race two grid.

“In the first race, the car was sliding around a bit and we didn’t quite have the ultimate pace. The leader had a lot of prior experience at Road America so he was probably out of reach, but we definitely had the speed to finish second until the re-start when Stoneman simply drove me off the track, clipping my front wing and allowing Félix to sneak past.

“That hurt us in terms of downforce and front-end grip, which in turn had an adverse effect on the car’s performance and made it harder to drive, but once I adapted to it I was able to settle back into some kind of rhythm. The long straights at Road America make it difficult to defend your position at the best of times with all the slipstreaming opportunities they present – especially with Indy Lights’ push-to-pass feature – so I had to be very strategic and focus on making sure I exited all the corners well to hold onto fourth.

“It rained on Sunday morning which left the track quite greasy at the start of race two, but I felt comfortable and although I knew Veach was behind me initially, I was never genuinely under threat and after he spun, I was lapping about a second faster than anybody else.

“Unfortunately, the appearance of the safety car changed everything again. Stoneman got a run on me at the re-start, but I re-passed him into Turn Five and defended going up the hill. We touched slightly as he put two wheels onto the grass, and then he forced me wide through the next corner. That created a bit of a roadblock, and I was collected by my team-mate in the concertina effect.

“We were quick enough to win on Sunday and to finish on the podium on Saturday, so it was disappointing not to come away with the points I felt we deserved but you’re always going to have bad weekends here and there and with my main rivals not scoring particularly highly either, it could have been a lot worse. Seven different winners from ten starts this year underlines the sheer competitiveness of the Indy Lights field, and I’m already looking forward to going to Iowa; we finished second there last season with fastest lap and have been strong on ovals recently, so the goal has to be to bounce back straightaway.”